An adorable Asian baby elephant has been born at Taronga Western Plains Zoo.

The male calf was born yesterday afternoon and is already up and doing well on his feet.

The infant, who has yet to be named, was seen hesitantly taking some of his first steps around his paddock.

The boy looked a bit shy at first, keeping close to his mother.

But before long, he was emitting a roar as he roamed around in his new home.

The calf’s mother, Thong Dee, is also doing well after her first birth at the zoo.

Zoo director Matthew Fuller said: ‘Thong Dee is doing a fantastic job, and the successful birth is a tribute to the hard work of our keepers and veterinary staff.

‘It’s an important achievement in our zoo’s nearly 40-year history, and we couldn’t be happier.

‘Every birth is important as it helps to secure a future for this endangered species.’ 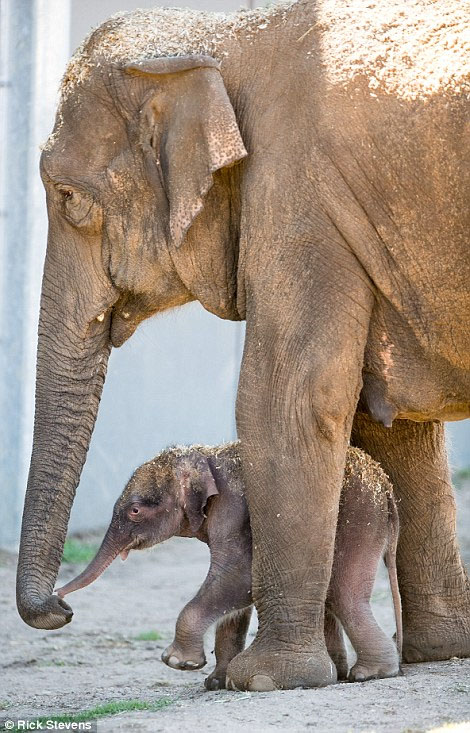 ‘Thong Dee and the calf are in great health and spending time together in the barn. We’ve seen the calf suckle, and we’re really pleased with the maternal behaviors we’re observing’.

The calf’s father, Gung, mated with Thong Dee in Sydney, before she moved to the zoo in Dubbo.

The mother and calf will be given time to bond before appearing together in public.

Taronga Zoo is expected to launch a contest to choose a name for the calf.

Asian elephants are classified as endangered, and at the current rate of decline, elephants could become extinct in the wild within 20 years. There has a population of between 410,000 and 650,000 worldwide.