A wild elephant recognized the vet who treated him 12 years ago in a heartwarming moment captured on camera.

A 31-year-old elephant named Plai Thang reached out his trunk to touch Dr. Pattarapol Maneeon’s hand during a surprise reunion this month.

In 2009, the elephant was found struggling in the jungle in Rayong, eastern Thailand.

It was suffering from a potentially fatal infection with trypanosomiasis – a parasitic condition also known as sleeping sickness. 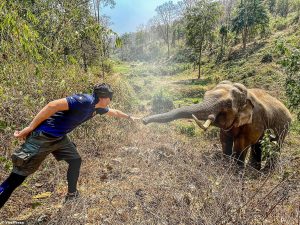 Dr. Pattarapol has come to treat the elephant with this condition: ‘nearly death’ and suffering from fever, loss of appetite, and swelling on the face, neck, and stomach. 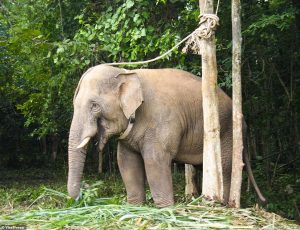 Plai Thang also suffered from eye inflammation, stiff legs and back, and anemia.

The ailing animal was taken to Forest Industry Organization territory in Lampang province to be treated by staff from the Ministry of National Parks, Wildlife, and Plant Conservation.

He was released a few months later after recovering.

Earlier this month, Dr. Pattarapol was patrolling the area when he said he recognized the distinctive sound of the elephant he encountered 12 years ago.

He motioned for Plai Thang, who was reaching out to greet Dr. Pattarapol, making contact with a human for what is believed to be the first time in more than a decade.

The vet was sure that Plai Thang recognized him. 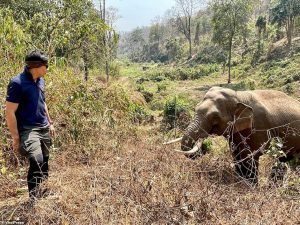 Dr. Pattarapol said: “I remember that sound very well. ‘The noise of Plai Thang is unique.’ 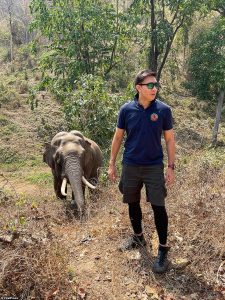 ‘Plai Thang was very aggressive when we first met. His body was weak and he couldn’t fight other elephants. It took a long time for him to heal, but we learned that he was brilliant and cared for himself.

‘We met again recently. We could remember each other and we said hello. It was an extraordinary moment.

“I hope it encourages people to appreciate the work that they do with elephants,” Dr. Pattarapol said.

Elephants are the official animal of Thailand and an estimated 3,000-4,000 species of animals live in the country.

Of these, at least half are domesticated, while the rest live in nature reserves.