This is the dramatic moment an elephant charged a bus and broke its windshield in southern India.

Footage filmed by a passenger shows the giant elephant smashing the glass with its tusks during an encounter on September 25 in Coonoor, in the Nilgiris district.

The incident happened around 9 a.m after the state-owned bus carrying government workers from Kotagiri to Mettupalayam stopped for an elephant to cross the road. 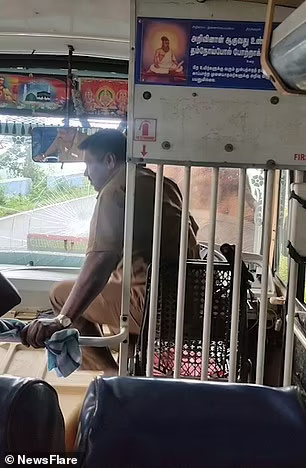 Suddenly the elephant rushed onto the bus. Footage shows the driver initially backing away, but this provokes the giant animal to speed up as it chases the bus.

The driver changed tactics and pulled up. He remained in place when the elephant smashed the windshield while the passenger gasped in the back.

The elephant smashed the glass again and still blocked the way of the bus.

At this point, the driver got up and led the passengers to the back of the bus as the elephant made a final dash into the bus’s windshield.

Local reports said the animal soon returned to the forest, and the driver was able to start the bus and carry his passengers to safety.

His calm actions won praise from officials. Supriya Sahu, Principal Secretary, Environment, Climate Change & Forests, at the Government of Tamil Nadu, tweeted: ‘Great respect for this Government bus driver in Nilgiris who kept his composure right away, even when a terrible crash hit him on the bus from an agitated tusker.

‘He helped get passengers to move back to safety during an incident this morning. That’s why they say that a cool mind works wonders.’

It’s not just buses that cause elephant fury. Last month, an elephant was filmed attacking a giant sculpture at a wildlife park after mistaking it for a love rival.

Park official Ple Srichhai said the bull might mistake the sculpture for another male, threatening its breeding rights.