The moment a baby elephant is still learning how to walk properly, took a tumble as it tried to keep up with the rest of the herd has been captured in a stunning series of photos.

The adorable animal is believed to be less than a month old but has been pictured trying to walk alongside older animals.

The images were taken by wildlife photographer Leighton Lum, 33, of Aiea, Hawaii, at Ambolseli National Park in Kenya.

Leighton said: ‘I noticed this particular elephant was a lot smaller than the rest of its siblings, and my guide confirmed he was probably less than a month old.

‘It was great to watch him and how he started to learn from the adults like blowing dust to reveal the grass underneath.

‘The baby elephants don’t have the strength and stamina to keep up with adults, so after walking around the park all day looking for food, this little guy was exhausted.

‘It’s hard not to get attached to animals like this, he was just so adorable, and it’s incredible to document him.’ 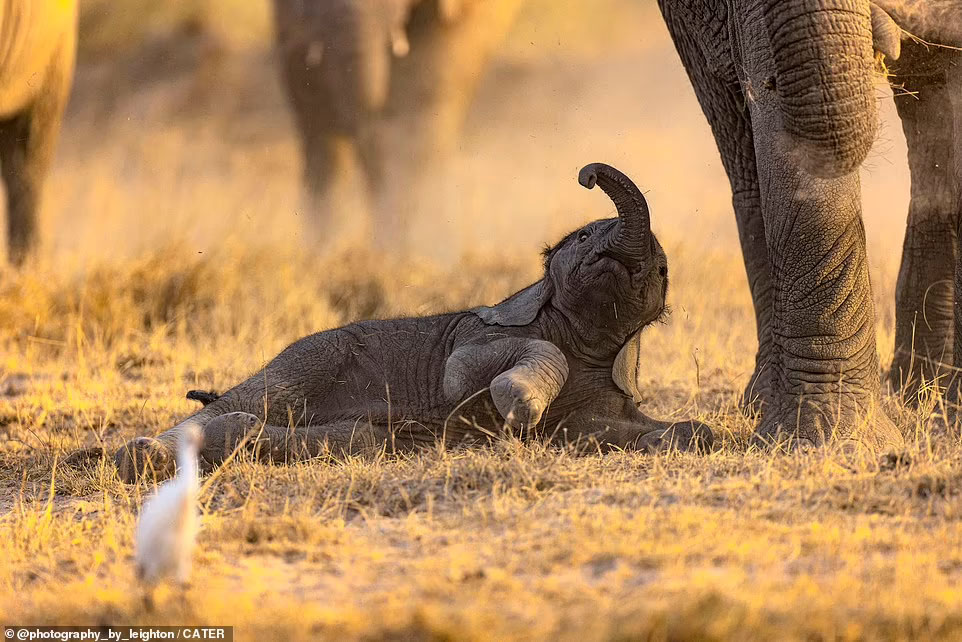 Uh oh! This is the moment a baby elephant, still learning how to walk properly, took a tumble as it tried to keep pace with the rest of its herd 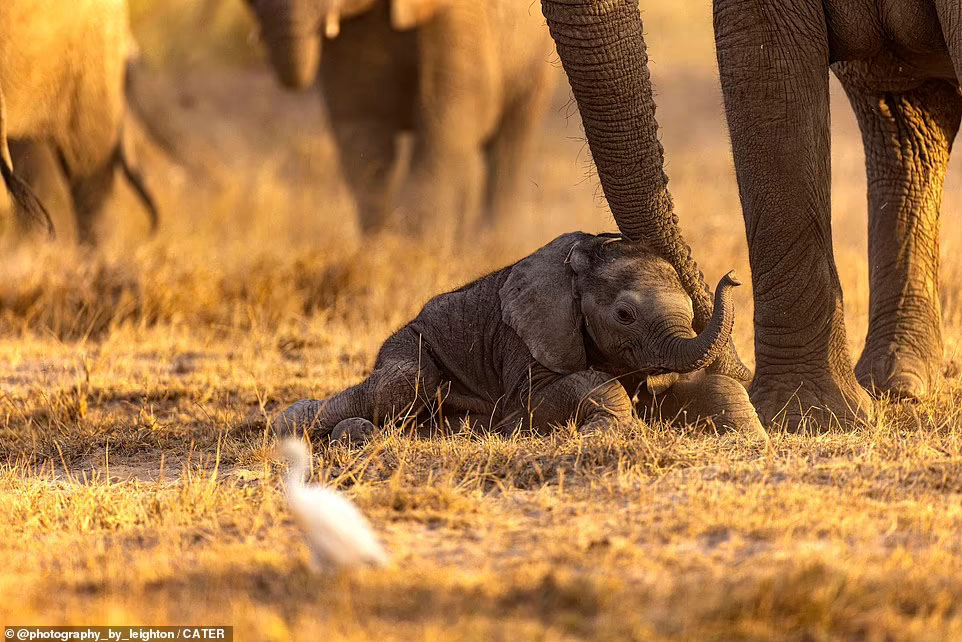 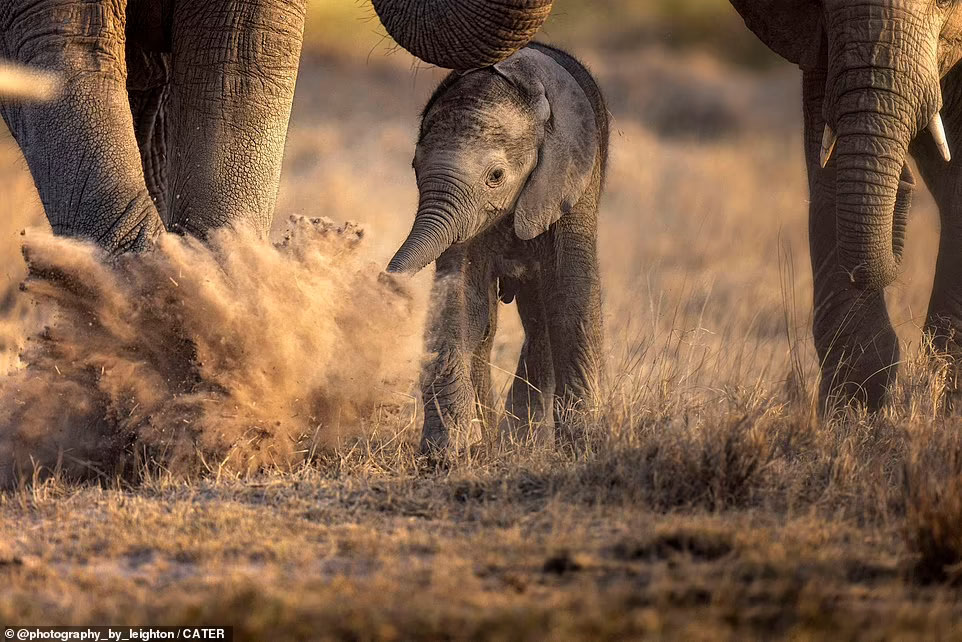 Blowing dirt: Wildlife photographer Leighton Lum, 33, of Aiea, Hawaii, who spotted the baby elephant at the Ambolseli National Park in Kenya said: ‘It was cool to just watch him and how he started to learn from the adults like blow dirt to expose the grass underneath’ 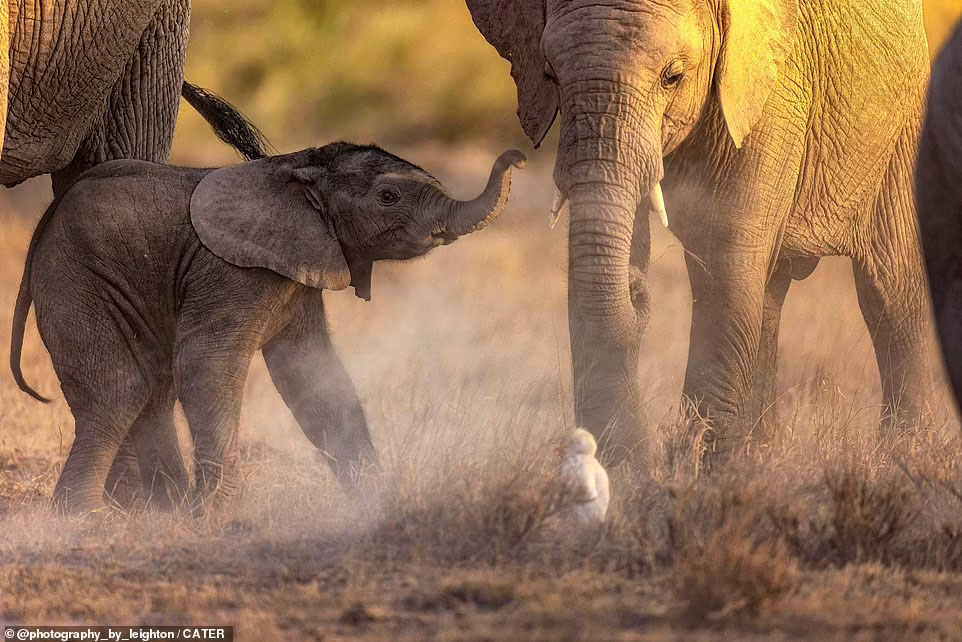 Wait up! The baby elephant raised its trunk towards one of the older elephants in the herd as it tried its best to keep pace with them 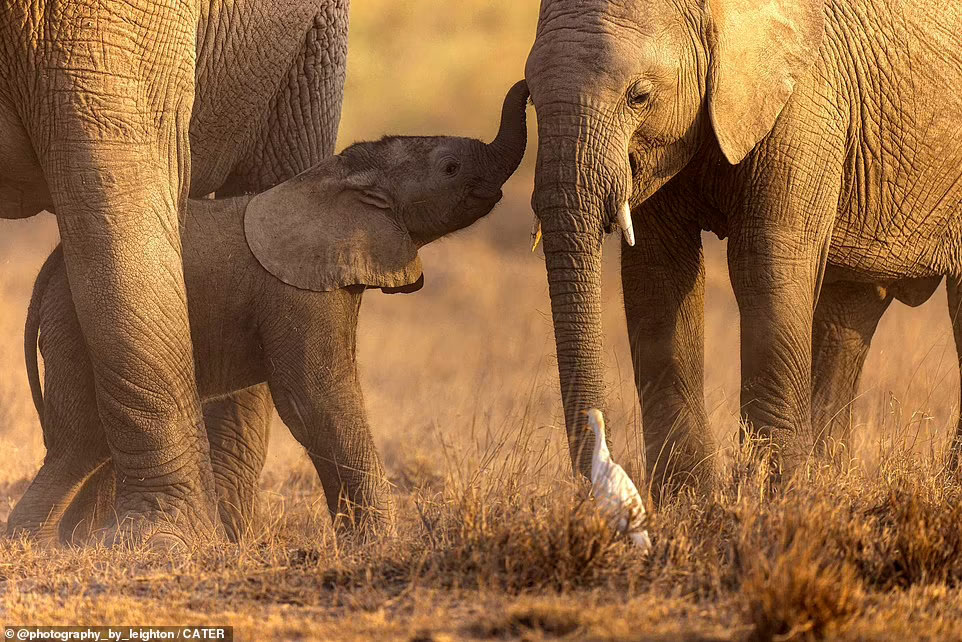 Without the strength or stamina that the older elephants in the herd have, the smaller animal was left tired from a day of walking 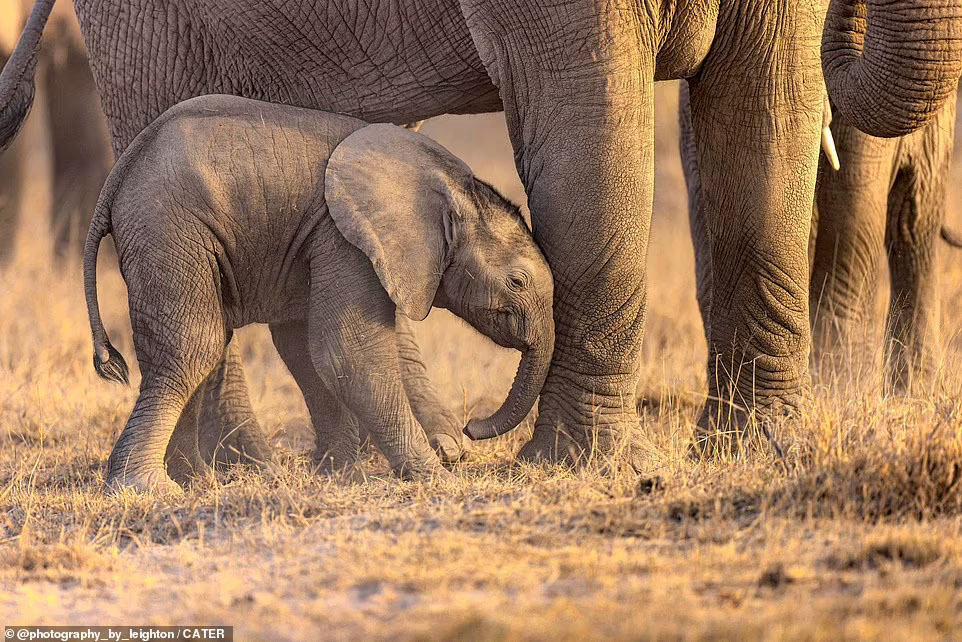 Staying close! The infant animal was spotted nuzzling up close to one of the older elephants as it walked alongside its herd 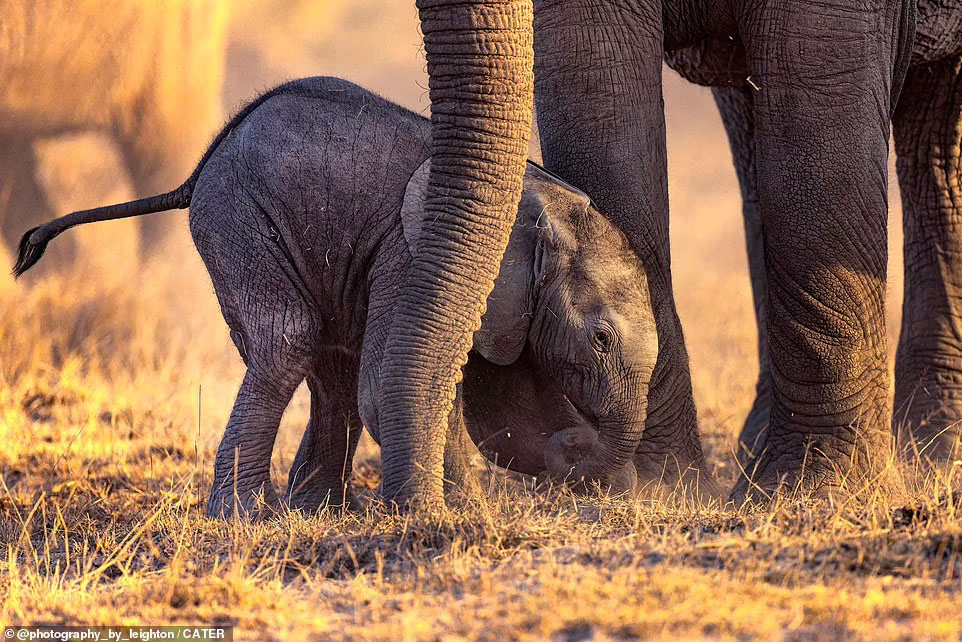 Oh dear! Having been on its feet for a long time, the baby elephant tripped over its front legs and started falling to the floor 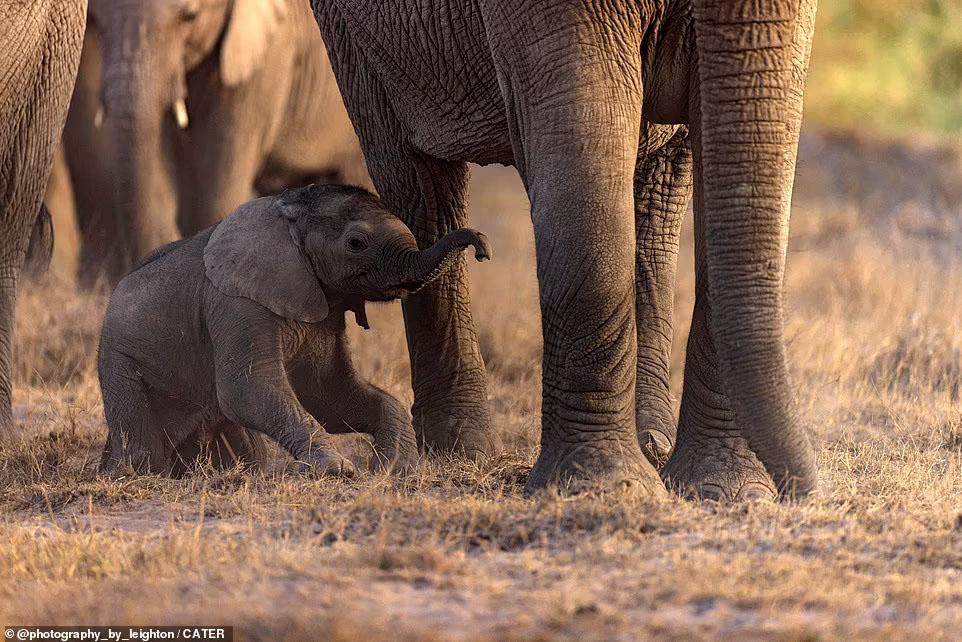 Attempting a graceful descent to the floor, the elephant also lowered its back legs, trying to sit rather than fall down 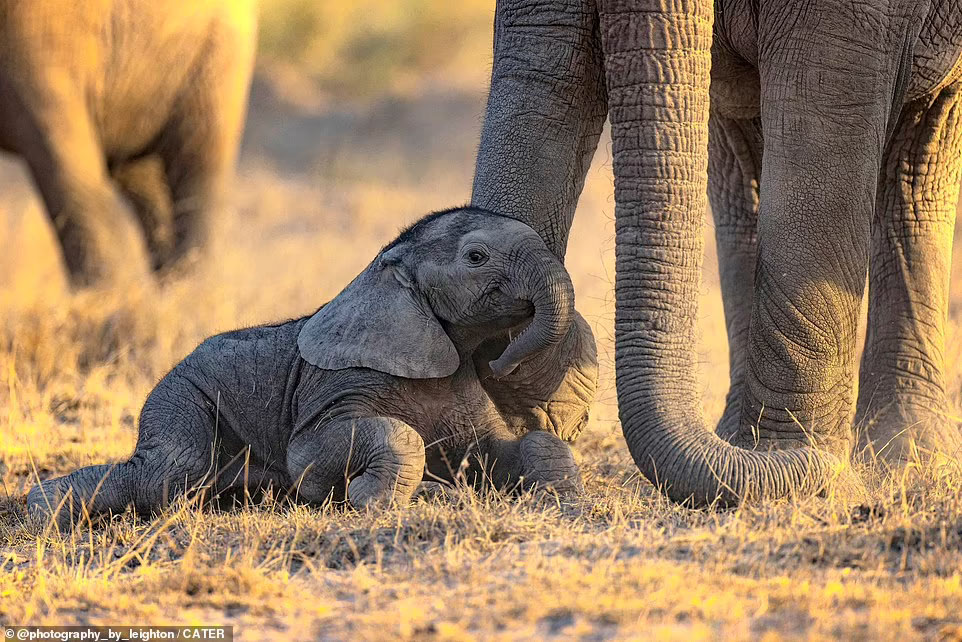 Just needs a second: Having reached the floor, the elephant leans up against one of the older members of its herd 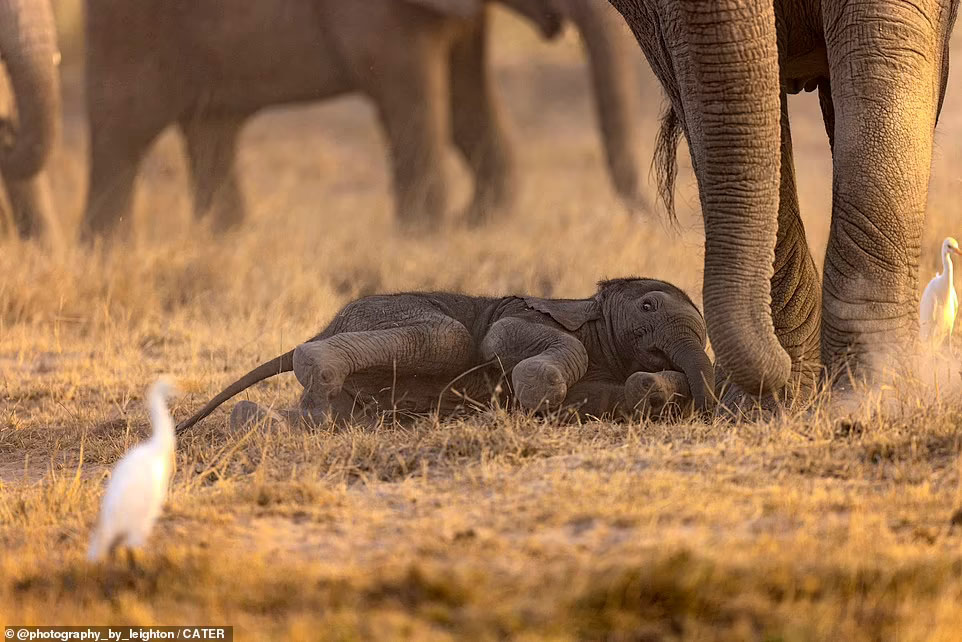 Tired out: Still exhausted from its full-on day of walking, the elephant rolls onto its side for a quick lie down