These happy elephants look like they’re having a good time.

The orphaned caught by the camera were covering themselves in the dust and turning red.

Flinging trunk-fulls of red earth over their massive bodies, these large animals will droop after a mud bath. 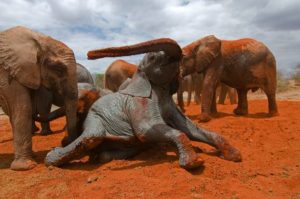 Mud and dust form a thick layer that protects the elephant’s skin from the sun and insects.

Mr. Baines said: ‘It was pretty funny to see them covered in red dust, some of them very funny – almost like clowns putting makeup.

‘We had to be careful not to get covered in dust like elephants.’

The elephants were part of a herd of orphans being cared for at the David Sheldrick Wildlife Trust in Ithumba.

Faith has restored the elephants, many of whom have undergone traumatic events at the hands of humans, before releasing them back into the wild. 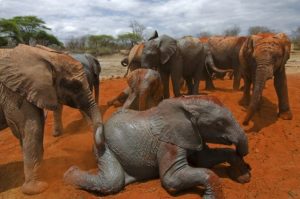 A highlight of the day for the elephants at Ithumba is a visit to the deep mud baths, where young animals can roam and play. 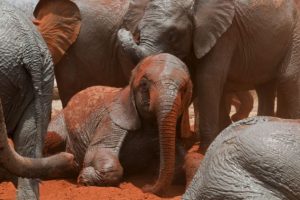 Mr. Baines said: ‘The project works to get these orphans back into their natural habitat. 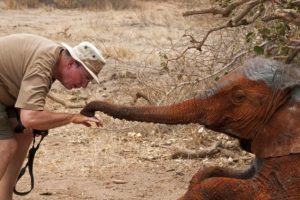 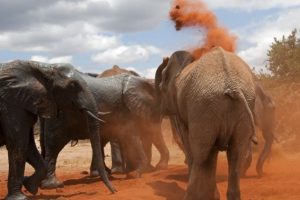 ‘Seeing them so happy was one of the most amazing wildlife encounters we’ve ever had and put so many smiles on our faces. 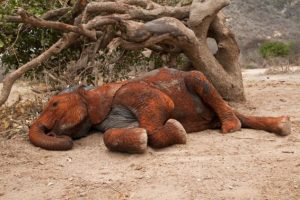 ‘Elephants often dust themselves, and so they take on the color of the earth in their surroundings. 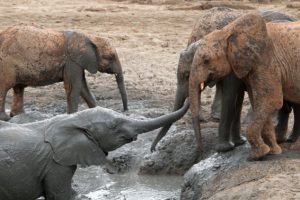 ‘Although they can dust themselves at any time, their impact is most significant when they do so after being submerged in mud as the dust builds up in a thick layer on the skin.’

Mr. Baines said that the number of elephants admitted to the trust had increased as demand for ivory from Asia had caused an enormous boom in poaching.

Snakes and habitat loss from expanding farming to feed a growing population also add pressure and lead to conflict situations between humans and elephants.

Mr. Baines said: ‘The most surprising thing of our time with the Ithumba unit was to see orphans who have successfully transitioned back to the wild, returning to visit stockpiles store.

‘One of these, Nasalot, a 12-year-old schoolgirl, walked up to us and enjoyed some physical interaction with us.

‘Other former orphans also arrived – some even took their feral companions to the storage shed and mud baths. “