Phoebe, a 33-year-old Asian elephant, is expected to give birth to a calf in mid to late June.

This species is threatened with extinction, and it is estimated that less than 40,000 animals are remaining in their native range due to habitat loss and poaching.

Hank, also 33 years old, is the father of the calf. Phoebe is artificially inseminated, a rare procedure for this elephant, with less than ten successful results.

African elephants have twice as many births after artificial insemination. According to the zoo, Phoebe and Hank’s natural breeding attempt was unsuccessful. 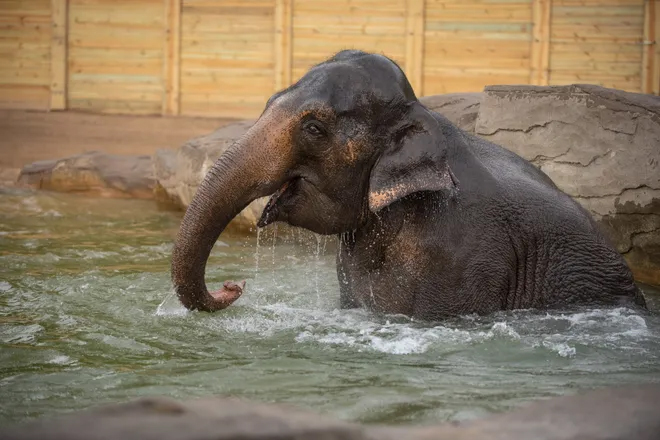 Zoo spokesman Jen Fields said, “the ultrasound images were not used to determine the sex of elephants because the baby elephants were too large to be seen in a single image.”

But it can help you see important things like a healthy, beating heart, she said.

This baby is Phoebe’s fifth calf in general and the fourth in Columbus. She is the mother of all the Asian baby elephants of the zoo.

Beco, the zoo’s other male elephant, is celebrating her 12th birthday later this month. Phoebe gave birth to the zoo’s first Asian female elephant, a male calf named Bodhi, in 2004. It now lives at the Denver Zoo.

The zoo also has three other Asian female elephants, Connie, Sunny, and Rudy.

“Every baby elephant is precious and important to the survival of this endangered species. We are proud to celebrate Phoebe’s pregnancy with our zoological colleagues and conservation partners, as well as our central Ohio community,” said Columbus Zoo President and CEO Tom Stalf.

Elephants have the most prolonged gestation period of all mammals, lasting about 22 months. At birth, newborn elephants can weigh between 200 and 300 pounds and be about 3 feet tall.

Ultimately, the goal is to maintain genetic diversity, keeping animals healthy. These plans also reduce the need to regenerate family plants with genes from wild animals.

In addition to its breeding program, the Columbus Zoo is also a proponent of conservation initiatives benefiting Asian and African elephants, including projects focused on reducing human-conflict elephants in their native range.