Limpopo is an allomother, the daughter of a Matriarch, a friend and a sister. She was constantly drawn to the world around her, amazed and captivated by everything, with her detective trunk, steady walk, sharp eyes, and cheeky, confident personality.

Today, we celebrate 15 years of her life, her adventures through the wilderness every day with her family, young and old, and her unique personality that makes her stand out. This is the story of Limpopo. 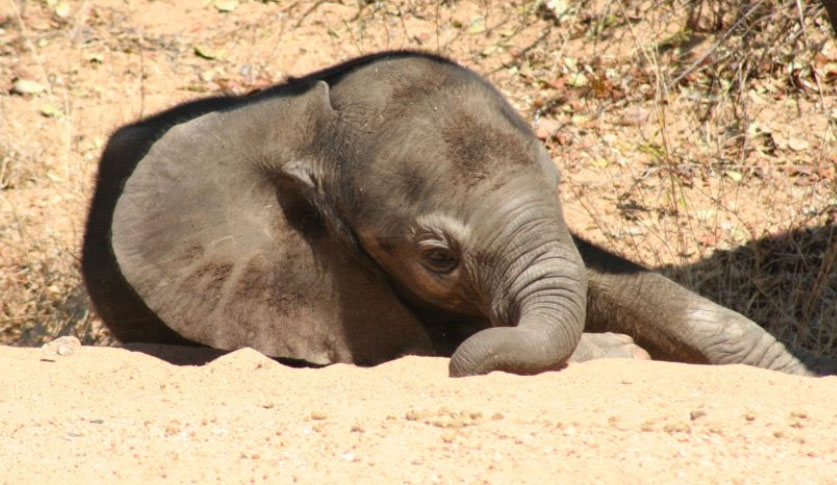 On August 19, 2006, Limpopo was born into the Jabulani herd. Her birth was hugely important for both the herd and our team, as she was the first elephant born in the rescued herd after being saved from culling in Zimbabwe and brought to South Africa. Limpopo was a sign that the herd was happy and healthy.

It seems fitting that Tokwe, the Matriarch of the herd, would also be the first mother of the herd, as she would be the perfect elephant to set an example of motherhood for others. We are fully confident in her abilities in the future. However, Limpopo’s father remains a mystery.

He may have been one of the bulls of the Jabulani herd. However, the birth coincided with a little adventure Tokwe took, exactly two years before that date, where she went on her own into the bush and returned the next day. So it’s highly likely that she may have been chemically laced with one of the wild bulls in the reserve.

We knew we needed a poignant name for this special little elephant… so we decided to name it Limpopo, a large river that separates South Africa from Zimbabwe. This is a perfect name, as the herd was rescued from Zimbabwe and brought to South Africa, so it has ties to both countries.

When Limpopo arrived, the Jabulani herd had yet to experience true family dynamics. We believe she helped the rescued herd develop and connect with their maternal instinct, not just Tokwe but all the females in the herd. Limpopo loves to be loved and is a gentle, proud and affectionate animal.

Three years after Limpopo was born, Tokwe gave birth to Pisa again, and then three more elephants were born to other females in the herd. Three other orphans were successfully integrated into the herd after Jabulani. : Kumbura, Timisa and Khanyisa.

This led Limpopo to take on the role of “Big Sister” of the herd, and she performs that role wonderfully, always protective and helping her mother with the baby elephants.

She has been known for confronting dangerous animals that have crossed their paths in the sanctuary to protect them. Sometimes, she can be too curious and rough with the younger elephants, like Khanyisa, perhaps not realizing her strength simply due to her daring nature.

Her best friend is Klaserie, born only six months after her, so she spends most of her time with her if she isn’t by her mother’s side.

Limpopo is very close to Tokwe, and it seems that she is constantly watching to learn from her, which is important given that Matriarch’s eldest daughter will often replace her role if and when she passes away.

Tokwe has passed a lot of her good genes on to his daughter, Limpopo, whose skin was slightly less wrinkled compared with other elephants, her forehead was slightly pointed, and her tusks were slim, neat and even.

She is also an active elephant, like her mother, therefore has a more athletic body. She has a medium-sized body and very few hairs on the tip of her tail, and her eyelashes are long and very thick.

Limpopo is an excellent Matriarch in the making, judging by how far she has achieved over the past 15 years. She is a brilliant and beautiful young female and very empathetic towards every elephant in the herd.

Of course, many people have called Limpopo a diva (she is definitely an extrovert), as she has become very used to being noticed by many as the only child in the herd, and quite easily envious, but she has brought so much joy to the herd and those who followed her journey, whether foraging in reserve or splashing in the mud and water at the dams.

She easily cares for and protects the newest orphan, Khanyisa, and a close sister to Pisa and the other members of her blended herd.

It’s incredible to watch Limpopo and her family roam in their wildlife sanctuary, safe and protected, while continuing to grow and change in skills and social dynamics when the new orphans are integrated and accepted into the herd. We look forward to celebrating this special elephant, who has taught us so much about elephant life and love for many years to come.