Faa Mai is an elephant full of love for a particular person – she is obsessed with Lek Chailert, the founder of Elephant Nature Park (ENP), the Thai elephant sanctuary that Faa Mai calls home.

Sometimes that love makes her a little overprotective. In a recent Facebook post, Chailert describes an incident where Faa Mai wouldn’t let her out of sight – or her grasp.

“Today, she [Faa Mai] saw me out of the corner of her eye while she was playing in the mud and happily came over to hug me with a trunk full of mud,” Chailert said. “My hair and face were covered in mud, so I went down to the river to wash up.” 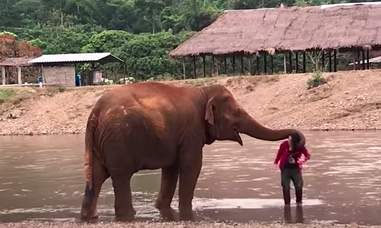 Faa Mai, 9 years old this year, did not want Chailert to leave her. So she followed her into the river and stroked Chailert with her trunk as Chailert tried to clean herself – and someone captured the whole thing on video.

Chailert said: “She was constantly checking to make sure I was safe, touching me with her trunk. “The more she touched me, the more I got covered in mud.” 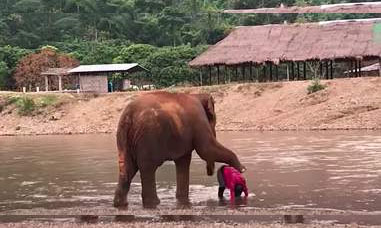 Faa Mai didn’t just use her trunk to protect Chailert – when Chailert knelt in the water, Faa Mai put a protective foot on Chailert’s back. And when Chailert stepped out of the river, Faa Mai was sure she was right next to her.

“She then threw me out of the river the same way a mother would her calf,” Chailert said. “Sometimes I wonder what Faa Mai is thinking, acting as caring and protective as if she were my mother.” 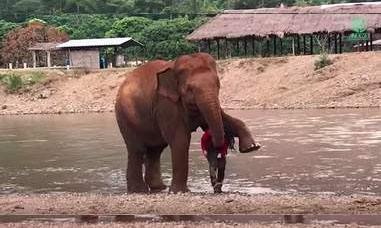 This is not the first time Faa Mai and Chailert’s strong relationship has been caught on camera. Chailert often sings to Faa Mai, and two years ago, someone recorded Chailert fanning and lullaby to Faa Mai as the baby elephant happily snored. 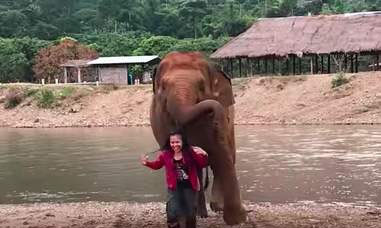 Faa Mai is not the only elephant at the ENP to have a deep relationship with her rescuers. When Chailert’s husband Darrick was on a swim, a baby elephant named Kham Lha jumped into the water to “rescue” him from drowning, even though he was in no danger.

Many of the elephants residing at the ENP have been rescued from the tourism industry, including Faa Mai’s mother, Mae Bua Tong, who was forced to carry tourists up and down the mountain on a two-hour trip eight times a day. 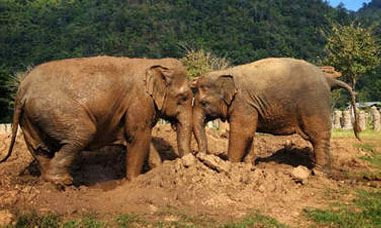 What Mae Bua Tong has been through is not uncommon – thousands of elephants are now used in the tourism industry throughout Thailand and other Southeast Asian countries such as Vietnam, India, Sri Lanka, Laos, Cambodia, and Indonesia. In some cases, elephants work so hard they eventually die from exhaustion.

In 2005, Mae Bua Tong was fortunate to live at the ENP with her eldest child, Tong Jan. Faa Mai was the first elephant to be born free at Elephant Nature Park.