Wandering alone in the forest, this heartbroken baby elephant was rejected by his family after being reintroduced to the wild.

The three-month-old baby, called Gold, was first separated from his mother after falling into a well dug by illegal loggers 20 miles from Buon Don in Vietnam.

Rescuers spent two weeks nurturing the young animal back to health in the hope he could be reunited with its family.

British wildlife expert Dr. Jake Veasey tried to encourage Gold to rejoin his herd by pushing the baby towards them – and at first, it seemed like his attempt had been a success.

But his team’s joy turned to devastation when he was found alone less than twelve hours later, some distance from the area where he had been left.

Dr. Veasey said that Gold’s mother might not have been in the herd at all, or she may not have recognized him as he had been away for two weeks and smelt of humans and human baby milk.

‘Maybe her milk had dried up, and she was no longer lactating,’ he added.

Gold lost his family in March after he got trapped in a well dug by illegal loggers, who cut down rainforest trees to sell timber.

While the adult elephants were large enough to reach the well’s water supply with their trunks, Gold’s smaller stature meant he fell in when he tried to drink.

Rescue workers had to move the rest of the family away from the well to save Gold without being attacked themselves, as elephants in Vietnam are nervous around humans and view them as a threat.

Despite hopes that the herd would eventually return and find the baby, the adult elephants had been scared off by the human presence.

Now Gold is living in temporary accommodation while Animals Asia builds a sanctuary to care for him and other elephants.

‘Gold was so depressed and lonely that we worried he might not survive,’ said Dr. Veasey, who explained that the team was at first reluctant to ‘smother him with affection for fear of giving him ‘a human imprint’ and compromising his chances of life in the wild. 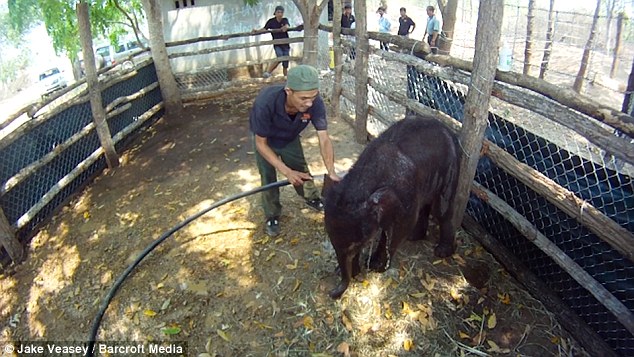 Gold had been showing signs of chronic stress – pacing back and forwards diagonally – and trying to suckle everything because he misses his mother’s teat.

But Veasey has now ordered specialist bottles for the baby elephant and hopes that when the sanctuary is built, his health and wellbeing will improve.

Currently, there is just one other elephant in the temporary corral with Gold. Still, Veasey and his colleagues plan on building herds, thereby rescuing elephants from Vietnam’s tourist trade.

‘Often, the females have strong maternal instincts,’ he added.

‘It would be great to see Gold in a social situation where he can interact with other elephants and thrive.’