China’s famous herd of wandering elephants has stopped to rest after a record 300-mile trek across the country after they fled a nature reserve.

A herd of 15 wild Asian elephants has been wandering towards Kunming city, Yunnan province, since April 16 when they rushed out of a nature reserve in Xishuangbanna Dai province.

They are now in the countryside in the Xinyang Township, around 55 miles southwest of Kunming, and were spotted looking exhausted as the group lay down in a forest with their legs and trunks sprawled out over the ground.

The baby elephants appear to be sleeping in a pyramid pattern as one baby elephant can be seen clinging to the adult’s legs while one leans against the other’s trunk.

The elephants have come as close as two miles from the southernmost suburbs of regional capital Kunming, sparking fears they could enter the city and cause chaos. 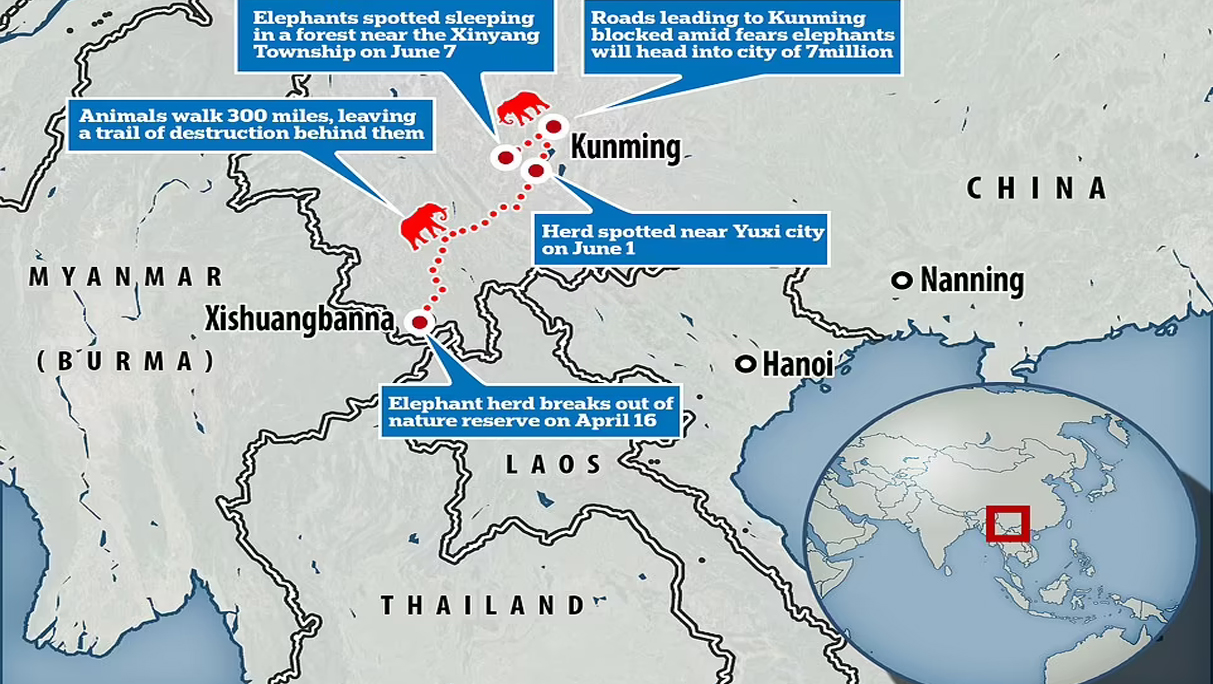 Roads were blocked by trucks while 18 tons of pineapple and corn were scattered in an attempt to lead the elephants out of the city’s Jinning district.

During their epic journey, the elephants were caught by security cameras at night as they roamed the urban streets, captured continuously from the air by more than a dozen drones, and Kept an eye on elephants looking to minimize damage and keep both pachyderms and humans out of harm’s way.

But the wild animals caused chaos by walking down urban roads and sticking their trunks through residential windows in Kunming, Despite efforts by officials to get them out of the way from the populated city of 7 million people in the Southwest.

They raided farms for food and water, visited a car dealership, and even showed up at a retirement home, where they poked their trunks into several rooms, causing an older man to hide under his bed.

The elephants also broke into the barns and gnawed on farmland, causing an estimated 6.8 million yuan ($1.1 million) in damage.

Last week, a video, captured by dozens of drones from the ground and in the air, showed elephants wreaking havoc as they plowed residential streets, walked up to people’s driveways, and gnawed gnaw the crops grown on the farm.

The adventures of these giant mammals have enthralled the nation, with hundreds of millions of people taking to social media to discuss their journeys.

Elephants are given the highest level of protection in China, allowing their numbers to grow steadily even as their natural habitat shrinks and requiring farmers and others to exercise maximum restraint when encountering them.

That means the herd will not be euthanized, while wildlife officials also want to avoid the use of sedatives for babies.

Government orders have asked people to stay indoors and not stare at them or use firecrackers or try to scare them away.

To date, more passive means are being used to keep them out of urban areas, including parking trucks and construction equipment to block roads and using food to lure them away.

As of Tuesday, the herd remained on the outskirts of Kunming, a city of 7 million, with one of the males having left on his own, creating even more excitement and anxiety – for those trying to track them.

A statement Monday from a provincial command center to monitor the group said the elephants appeared to be resting. At the same time, more than 410 emergency responders and police officers, many facilities, and 14 drones were deployed to track them.

Residents in the area were evacuated, temporary traffic control measures implemented, and two tons of elephant food were brought in.

Another goal is to ‘maintain silence to facilitate the guidance of the elephant caravan west and south, the command center said.

Animal experts told Xinhua news agency that it was unclear what prompted the herd’s migration, the longest migration ever recorded in China.

But they thought it is possible that the team leader ‘inexperienced led the team in the wrong direction’.

The herd originally consisted of 16 elephants, but two of them turned around on the trip and went home. A calf was then born during the walk, bringing the current total to 15.

The herd of wild elephants lived in the Xishuangbanna Dai Nature Reserve until moving out of the area over a month ago.

Two weeks ago, elephants roamed the streets of Eshan, near Yuxi, and stayed there for six hours with residents warned to stay indoors.

During that time, the elephants roam the streets, break into barns, eat trash cans, and gnaw their way through nearby farmland.

According to Xinhua, the damage caused by the elephants to farmland along their route is now estimated at 6.8 million yuan ($1.1 million).