They are usually seen meandering gracefully through the plains of Africa. Still, this young elephant was eager to pick up the pace on his daily walk as he demonstrated his breakdancing moves.

The calf’s show-stop routine was captured in front of the camera by South African photographer Graeme Mitchley, 43, in Kruger National Park.

But the baby, who was part of a herd walking down the main road to the Lower Sabie rest camp, was not pleased to see Mr. Mitchley and tried to intimidate him with his floor-filler moves. 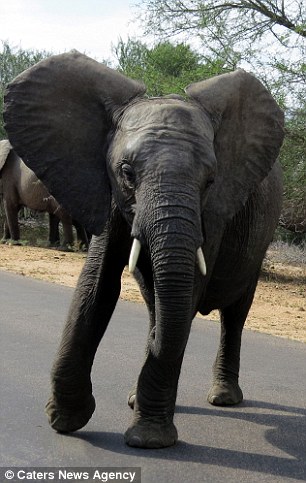 “The elephant looked like it was dancing a little for me. It kept me entertained throughout my trip,” said Mr. Mitchley.

“The street was full of other tourists, so I didn’t have much leeway, but I could tell that the elephant was not satisfied with my presence.

‘He tried to intimidate me with various moves. If it were an older elephant, I would have gotten out of there.
“These juvenile elephants are more bark than bite – they hit their ears and shake their heads.

“I don’t know if this elephant showed me he was going to sit on me, but it sure was entertaining.”

The hilarious sequence of photographs was taken in the Kruger National Park – the main road from Skukuza to Lower Sabie, two of the biggest camps in Kruger, one of Africa’s largest game reserves.