Meet Pea and Pod; the confused ostriches think they are ELEPHANTS after being raised by a herd of large mammals.

The eight-month-old Pea and Pod are not just ordinary ostriches; after being orphaned like chicks, they fully believe they are elephants. They are entirely inseparable from the herd, which they follow around all day.

Whether it’s charging or nudging them as they play or cuddling them in the same cage, the couple tries to imitate every move of the elephants. 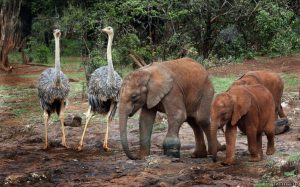 Cyprian, who looked after them at The David Sheldrick Wildlife Trust, in Nairobi, Kenya, fed two adorable birds from chicks along with dozens of orphaned baby elephants.

The orphaned couple was saved when a group of caregivers called The Milgis Trust in northern Kenya to transport an injured baby elephant to the Nairobi Trust’s nursery.

The chicks were cared for by the Kenya Wildlife Agency, but they turned them over to a Trust with limited resources, which could provide round-the-clock care.

Loaded on a plane with the injured baby elephants, they were flown to Nairobi, where they established direct relationships with the baby elephants at the nursery. 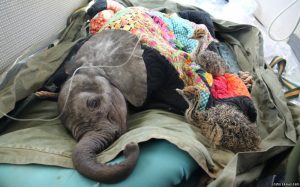 “A group of guards was called to northern Kenya to stabilize a baby elephant and prepare it for flight to the Trust’s Nairobi Nursery,” said Cyprian.

“The calf was saved from a deep well and nearly collapsed when they found it.

“But just as the team was preparing to carry the calves onto the mattress, loaded onto the plane, they were asked to rescue two orphaned ostriches.

“The chicks were handed over and put on the plane with the baby elephant rescued and flown to Nairobi.

“At first, they were raised with a few chickens; I took care of them every day when they were still young.

“As they get older, we mingle them with the elephants every few hours, and then they start staying with the herd all day in Nairobi National Park.

“From that point, they became part of a group of Nursery orphans, leaving early in the morning with the elephants and staying with them all day.

“You could even say the elephants adopted them, accepting them as part of their large family.” 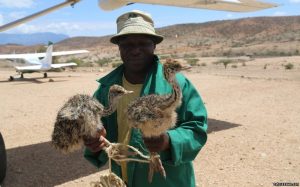 Notably, the elephants at the Trust embraced their feathered companions as one of their own, grabbing their necks and tugging their feathers like playful brothers and sisters.

The birds, now with their own barn next to the elephants, are even responsible for guarding the herd; they often walk behind them with wings outstretched to guide the calves. 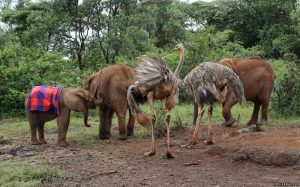 “They grew up with elephants as companions day and night when they were in the same barn next to them,” said Cyprian.

“They have each other for comfort and inseparability, but all things elephants are highly familiar to them.

“They understand elephants, are part of the game and love their companionship.”

“They are very comfortable with themselves, and the elephants have become their family.” 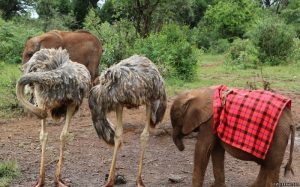