The 40-year-old elephant got stuck in a pile of mud – and no matter how hard he tried, he couldn’t get out.

Earlier this week, team members from the Big Life Foundation, a wildlife conservation group, saw the elephant near an outpost they use to monitor wildlife and watch out for illegal poaching activities in Kiboko, Kenya. They were not sure how the elephant got stuck in the mud, but they suspected it was trying to bathe.

Rob Brandford, chief executive of the David Sheldrick Wildlife Trust (DSWT), an organization that rescues struggling elephants, said: “Elephants of all ages will bathe in mud to coat their skins against the sun’s rays, and as a form of insect repellant.”

The team at Big Life Foundation knew they couldn’t help the elephant on their own – so they partnered with Kenya Wildlife Service (KWS) and DSWT, as well as the local community. Working together, they tried to pull the elephant out with the power of heavy vehicles – but it was challenging. The mud formed a glue around the elephant’s body, holding him in place in the mud.

And the longer the elephant stayed in the mud, the more danger he faced.

“The biggest problem is not being able to eat or drink, which is made worse by the animal’s attempts to gut itself, using up energy and becoming weaker,” Brandford said. “Also, this elephant can’t get into the shade to keep cool, and it can’t use its ears for that purpose, stuck as they were.

The teams were able to create a temporary water line from the pipe to at least get some water into the elephant during the operation.” 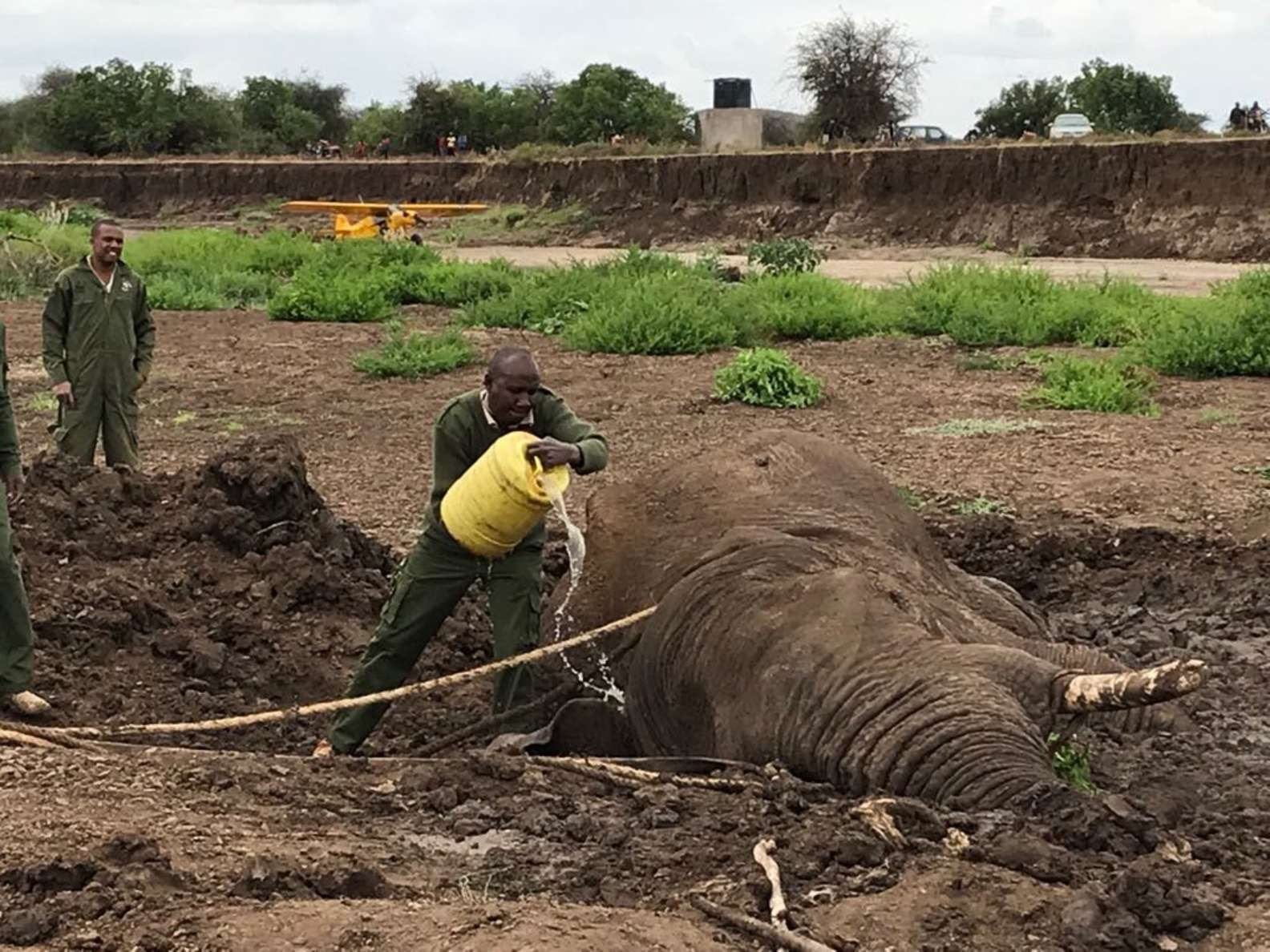 THE DAVID SHELDRICK WILDLIFE TRUST/BIG LIFE FOUNDATIONThe team worked tirelessly to help the elephant, and at one point, even pulled it out with two large trucks. But overnight, somehow, the elephant went back into the mud and got stuck again.

After three days of trying, the team almost started to lose hope.

“By day three, concern was growing, given the difficulty of getting the vehicles into the right position so that he could be pulled out without injuring him,” Brandford said. “There was rough terrain, with vehicles constantly stuck. With those concerns in mind, however, all involved were increasingly determined to succeed. ”

The team managed to pull the elephant out a second time by attaching his body to three Land Cruisers with heavy straps. The elephant managed to stay on dry ground this time after being pulled out, although it seemed a bit bewildered following the lengthy rescue process.

“He did little at first – he was exhausted from the challenge and without food and sun for such a long time,” says Bradford. “However, with intravenous fluids provided by DSWT and injections by KWS veterinarian, he regained his strength and was able to stand up.”

The elephant was a bull, so he traveled alone and did not belong to the family or the herd. However, the rangers at Big Life Foundation have since spotted him several miles from the rescue site, and they report that he’s doing really well.

For Brandford, the most exciting part of this rescue was simply “seeing him stand up in three days.”

Brandford said: “It was simple to put him in a position where it was possible, and there was indeed a joy and a sense of accomplishment from all involved that the hard work and long days paid off for this beautiful bull.