Three adorable elephants were caught on camera as they frolicked in the mud in northern Thailand.

The baby elephant Ronaldo (named after soccer player Cristiano) was the first to find the mud and started rubbing it and rolling around in it in Chiang Mai province on Sunday.

Two adult elephants named Boontong and Lersoo joined soon after seeing Ronaldo happy and huddled with him until feeding time at an animal camp. 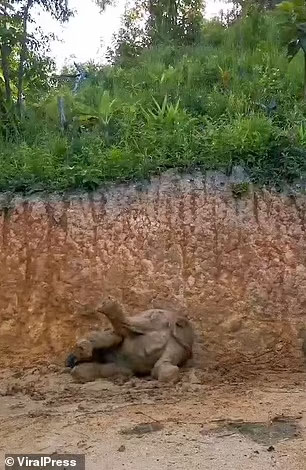 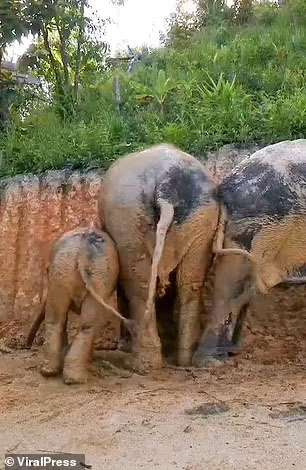 Mud baths are important for elephants, who use them to cool down on hot days. And the mud provides a layer of protection against the sun while helping to reduce insect bites.

Caretaker Suthatta Seesan said: ‘After the rain, they came out and started moving along the dirt tracks. The child is so smart, he knew that there will be mud after the rain.

‘They looked happy and enjoyed the mud bath. We just finished bathing them as they played in the mud. They are such silly creatures but as long as they’re happy we’re fine too. ‘

The three elephants are cleaned off by caretakers at the camp after taking a mud bath before they were given food to eat with other baby elephants.

Despite being one of the most popular tourist attractions in Thailand, elephant camps have been largely closed since the start of the Covid-19 pandemic last year.

Elephants are Thailand’s national animal and an estimated 2,000 are living in the wild while a similar number live in captivity.

In the wild, they roam deep in forests and in the country’s protected national parks but often encounter humans on the roads and in villages.

However, they are protected by the law, and killing them carries a maximum prison term of 3 years and a fine of 1,000 baht (£25).