A tortoise in South Africa was busy one afternoon, walking slowly on a dirt road, when suddenly, a herd of elephants appeared, heading straight for the little turtle. 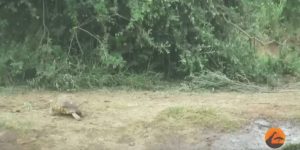 There’s no way the tortoise could outrun a herd of elephants (or most other animals, for that matter), and so it withdrew into its shell to wait and hoped that an elephant didn’t accidentally crush him with giant feet.

And one baby elephant even poked him with its trunk, probably trying to get him to play with her.

“Interestingly, the elephants seem to be aware of the tortoise’s presence and either very carefully step over the tortoise or just bump it gently with their giant feet,” Kruger Sightings wrote in a video about the encounter. 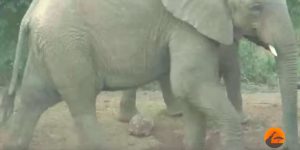 The herd stopped for a drink right where the old turtle was, there was a lot of chaos and exciting feet stomping around the scared tortoise, but somehow, every elephant managed to avoid stepping on it, even the children didn’t notice him there, and before long the herd was finally ready to move on – much to the turtle’s relief. 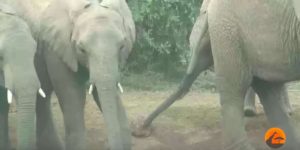 Kruger Sightings wrote: “For a minute or so, the elephants were standing on top of the tortoise and having a good time in the water. “But fortunately, the elephants soon moved a little bit upstream, and the tortoise immediately saw an escape route, allowing it to flee back to the safety of the surrounding bush.”

While the entire stampede didn’t last long, it was a bit of a close call for the tortoise, who will likely avoid any major roads from now on.