There is something both magical and awe-inspiring when it comes to one of nature’s largest, beautiful, and most elusive land animals.

The elephant has been around since practically the dawn of time, and these giant beasts have captured the imagination of everyone from artists to poets and beyond, but what exactly do elephants eat on to maintain their titan-Esq proportions?

These gentle giants have a diet and eating habits that may surprise and intrigue you!

Elephants, when it comes to their dietary restrictions, are gentle giants. At upwards of 16,000lbs, elephants are huge creatures that can be very intimidating at the same time, and while they are dangerous for people who roam into their habitat, they are not the type of animal that would make a meal out of a human. 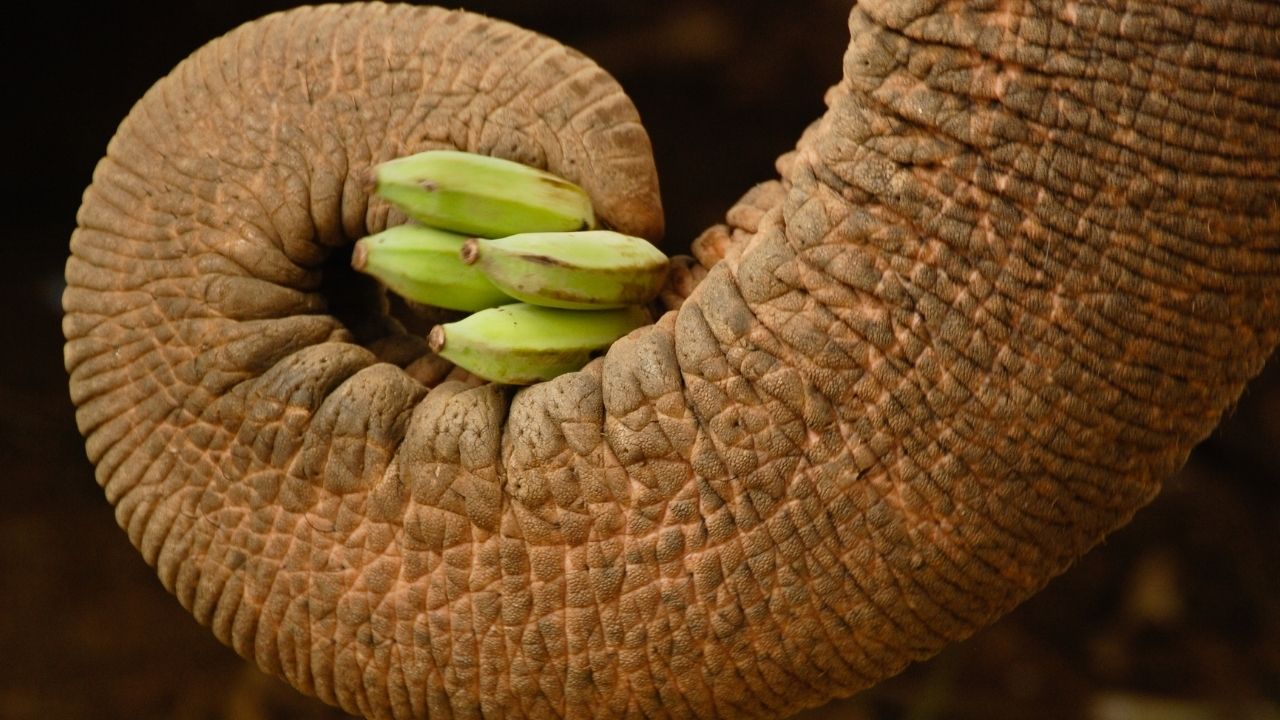 Elephants do not hunt other animals, nor do they dine on meat, bones, or other animal parts. They are what is known as a herbivore. It is an animal that only eats vegetables, vegetation, and plant growth.

Some people might find this pretty impressive considering how large elephants are and the fact that they usually travel in packs of larger numbers. This means that elephants need a tone of plant-life and vegetation to keep them healthy and well-fed.

In fact, the average elephant can eat over a whopping three hundred and thirty pounds of food per day! They will wash all that food down with well over ten gallons of water to stay healthy and hydrated.

Elephants have a huge body mass, and unlike some herbivores, elephants do not typically eat and rest. Elephants expel a terrific amount of energy just moving around all that weight. 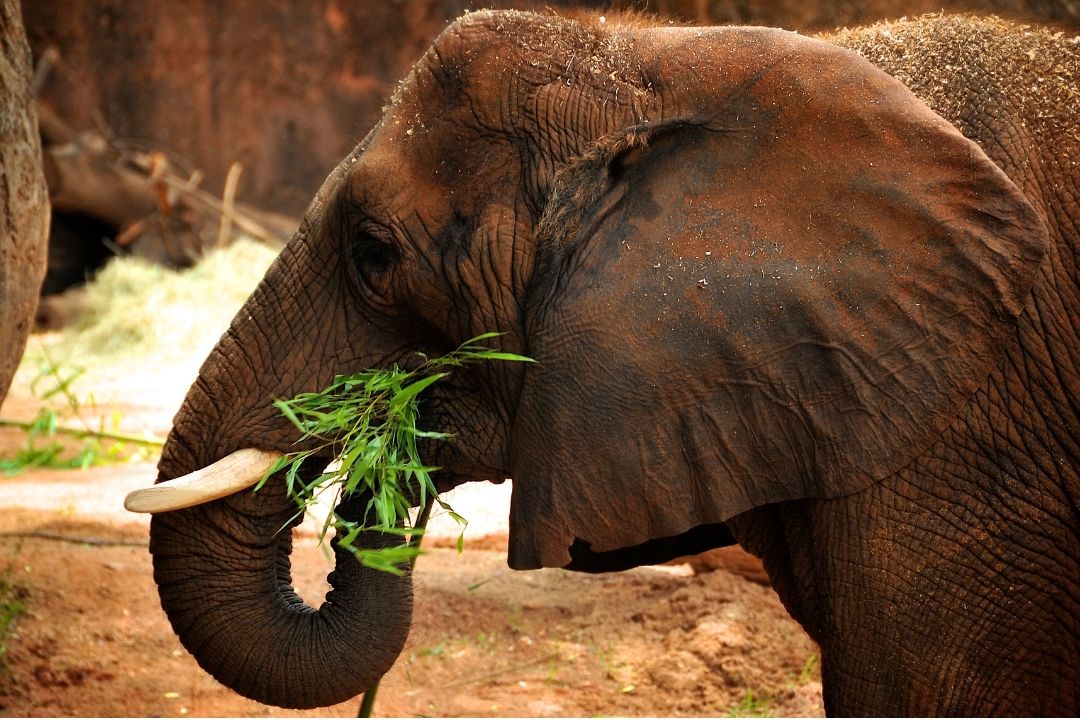 The fact that elephants can travel great distances in a single day, in some arid regions, I might add, means that they need all that food to keep their energy reserves up for long travels with the pack.

All elephants are herbivores and eat a vegetarian diet packed with rich nutrients that will help them maintain high energy levels, but not all elephants eat the same thing.

A considerable part of the individual elephant’s diet will rely on what is readily available to consume in their natural habitat. Unlike zoo elephants, wild elephants do not have someone to bring them their meals, so they must search for food whenever they are on the move.

Sure, all elephants eat an essential diet of twigs, leaves, flowers, and other vegetation, but let’s look at some of the specific differences between African and Asian elephants. 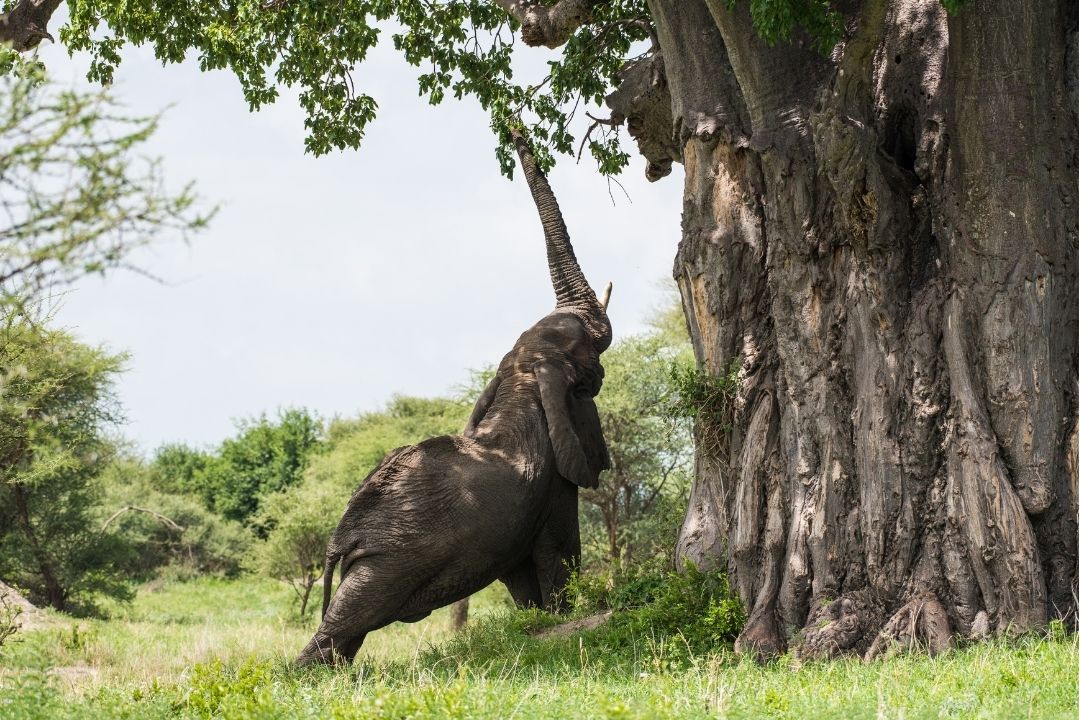 These wild elephants have a difficult task ahead of them when finding sustainable food in the harsh, unforgiving African wilderness. Because there isn’t much in the way of grasslands in Africa, at least not in areas where these elephants live, African elephants mainly survive on a diet of forest trees, bushes, and undergrowth.

African elephants can pretty much devour an entire tree if left to their own devices. They will strip the bark, eat the fruits of that tree, along with the leaves, and then make a short meal out of any roots that may be available to munch on as well.

However, African elephants are typically not total destroyers when it comes to the food supply. They usually like to browse the selection of twigs, leaves, and branches and take a little bit from each place so that they can come back and enjoy from the same spot another time.

Savannah elephants have their own specific sets of obstacles when it comes to food and water. These types of elephants are often reduced to eating weeds like rubber vine in order to fill their bellies. Like mesquite and prickly pear, other foods may not seem like an excellent meal to us, but to a Savanna elephant, they’re just part of the menu. 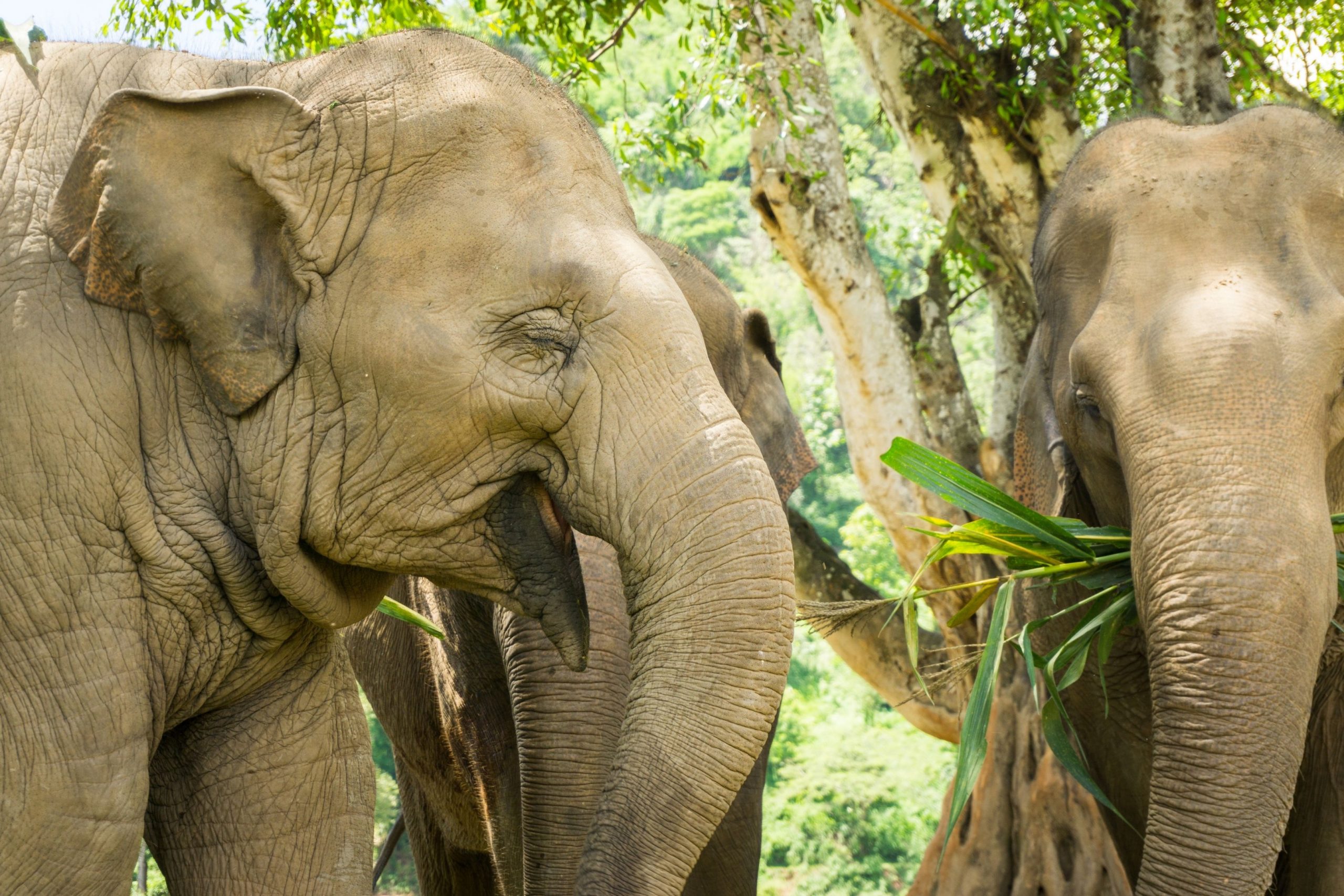 Because Asian has a more abundance of grassland and vegetation diversity, Asian elephants feed primarily on different types of grass and shrubbery.

However, when hunger becomes an issue, the Asian elephant has been known to eat very woody plants and shrubs, including some pretty thorny bushes that would otherwise not make for a great meal. Hunger rules all when you’re that big!

When it comes to energy, sometimes elephants prefer the sugary goodness that comes with fruits like bananas, if they are available in the region, and have been known to make a meal out of the fruit when they can find it.

Sugar directly translates to higher energy levels for these ever-moving beasts. Being a vegetarian in some of the most inhospitable places on the planet requires elephants to diversify things available for food options.

It is also very different when you start talking about zoo elephants. Because zoo elephants are often being taken care of for an extended period, they may have injuries or diseases that they acquired in the wild or in the zoo and do not migrate at the same level as elephants in the wilds of Africa and Asia.

They have a more controlled diet that is typically monitored by a dietician who works closely with zookeepers and veterinarians to ensure that each animal is getting what they need to maintain their healthy lifestyle in the zoo.

This also means that if a zookeeper or veterinarian thinks that an elephant is not getting specific nutrients, vitamins, or minerals, they can adjust the diet as need be in order to keep the elephants in optimal health.

This sort of healthy balanced eating is a lot harder to achieve in the wild and is one reason that elephants are always on the move and always looking for their next opportunity to get a meal and store some calories for the road.

Here’s a fun little fact! Some zoos will even accept donations of old Christmas trees and feed them to elephants in captivity! They will stand on the trees’ trunk and peel the bark and needles off the trees.

In fact, when it comes to treats, elephants are known to show great joy when they get a nibble of their favorite snacks. Captive elephants often love the site of a good banana bunch or even a few quality heads of cabbage. When it comes to wild elephants, believe it or not, tree bark is a favorite treat.

Elephants in the wild enjoy the full flavor and creamy texture of many different bark types in their natural surroundings. Plus, bark has a lot of other qualities too. It helps with digestion and roughage intake, so in a way, it helps everything else get digested better, as well as calcium to keep those big beautiful bones strong and healthy!

Since about eighty percent of an elephant’s day is dedicated to finding and eating food, it’s probably no wonder that food is such a HUGE priority for these massive mammals. Over a relatively long lifespan of, say 70 years, elephants can chow down on some vegetables.

Elephant feeding areas have often been described as looking like a bulldozer went through the area and just leveled anything in its path. Trees are scattered to the sides of paths, snapped in half, and bare of all signs of life.

Hungry elephants can make things difficult for the surrounding habitats if resources are scarce and humans have even been known to come into direct conflict with elephants when it comes to the limited resources available, and let me tell you this, a herd of elephants can make short work of a small village if food is a motivating factor! On the flip side, elephants only have a digestion capacity of around 50%.

Therefore, the rest of the undigested food ends up coming out of the elephant as manure. This is actually a good thing because this manure will help keep those feeding and pooping areas fertile and able to regrow food so that the elephants will be able to replenish over time.

This is incredibly efficient when you think about the complexity of growing and regrowing the hundreds and hundreds of pounds that elephants eat every single day. Elephants are also social animals by design.
They enjoy spending large quantities of time together. They seemingly enjoy eating in groups, and the way they browse for food allows for maximum social interaction at the same time, which is truly remarkable when you think about it.

There’s something basic and primal and comforting about sharing a meal with those you love and are closest to in life.

One last thing to consider is that elephants also eat huge quantities of food because, well, most of it goes undigested in the first place! It’s true!

Some baby elephants even eat their mother’s dung/poop to digest all the bits of food that went undigested the first go around!. Because undigested food offers very little in the way of energy, elephants must keep their bellies full of food to digest as much food as possible throughout the entire day.

This is actually why elephants typically also get very little in the way of sleep. Sleeping slows down digestion, and elephants can’t afford to lose any more of that valuable energy.

So, with that much food going into their bellies every single day, you might want to ask yourself, how do these giants of the savannahs eat? Well, it’s probably not a big surprise that their trunk plays a huge factor in helping get food and water into the mouth of the elephant.

The elephant’s trunk is a multi-tool that is essential to survival for the beast. Tusks also play a huge part in things as elephants can use those tusks to dig up roots and undercover treats and dig for water in the ground.

By now, you’re probably wondering why I haven’t brought up peanuts. Well, it’s because despite what movies and TV will tell you, this is 100% a myth, and elephants don’t really like o eat peanuts.

This seems to have been something that caught on when elephants were still a relatively new attraction at the circus.

Elephants are diverse and unique creatures that have an equally diverse diet depending on their habitat, weather conditions, and of course, what’s available. When you’re packing away that much food, you can’t help but be a little bit picky and a little bit opportunistic with your eating habits.

In conclusion, both Asian and African elephants are vegetarians and strict herbivores that graze and browse for food as it becomes available. They must consume a fantastic amount of food every day to keep up the energy it takes to move their huge bodies long distances across unforgiving terrain.