The finalists of the annual Comedy Wildlife Photography Awards have been announced and are more exciting than ever. Right now, you can vote for your favorites among the top curated list for 2021. Thousands of entries from professional and novice photographers have been submitted and carefully laughed over.

Since 2015, founders Paul Joynson-Hicks and Tom Sullam, both renowned photographers, have seen the competition grow rapidly. Now, it raises awareness for wildlife conservation efforts around the globe. Paul and Tom began with a mission to use “humour as a tool to engage audiences in the broader narrative of conservation.”

“A funny animal photo is creative because there are no barriers to understanding or taboos that must be negotiated. It taps into the anthropomorphic urge (big word!) that has been recognized as one of the most powerful stimuli for human empathy.

To truly understand animals and the issues that affect them, you need to empathize with them as fellow inhabitants of the same planet,” they wrote.

By laughing when we see animals exhibiting human-like expressions, we immediately feel connected.

“The content of the Funny Wildlife Photography Awards approached our sympathies by showing how similar we really are. You don’t have to cover your eyes or look away. We want viewers to share our enjoyment of nature and take the time to realize its value.”

When millions of people share them, it can only help in the fight to save wildlife. This year, the competition is helping efforts to save orangutans in Borneo.

One of the standout entries in this year’s finalists was Wenona Suydam’s photograph of a Kodiak brown bear.

Draw me as one of your French bears
Aptly titled “Draw Me Like Your French Bear,” the painting shows the bear lying in the sand. This has to be one of the best for funny wildlife photography because we couldn’t stop laughing.

Suydam wrote: “This young Kodiak brown bear ran to the bottom of the river and stopped across from me. “She started making herself a bear bed, reclaiming the sand with her giant claws.

Once she got the bed she wanted, she lay down on her back and started smiling at me! And she didn’t stop smiling! I would have to say she is the most provocative bear I have ever seen! ”

Monkey riding a giraffe
When it comes to humorous wildlife photography, a giraffe will probably always be a very unlikely subject. Well, at least it looks like a monkey is riding on the plains of Africa while carrying a staff. However, it was an illusion created by perfect timing. I bet you won’t see a scene like this any time soon, right?

“During a game drive, we spotted a group of monkeys playing with each other, jumping up and down from a bare tree branch,” Regihouwer told Insider. “It was a pleasure to watch. After a while, I saw a giraffe coming from the right. By the time the giraffe passed through the branch, one of the monkeys was already on its pylon riding the giraffe.” 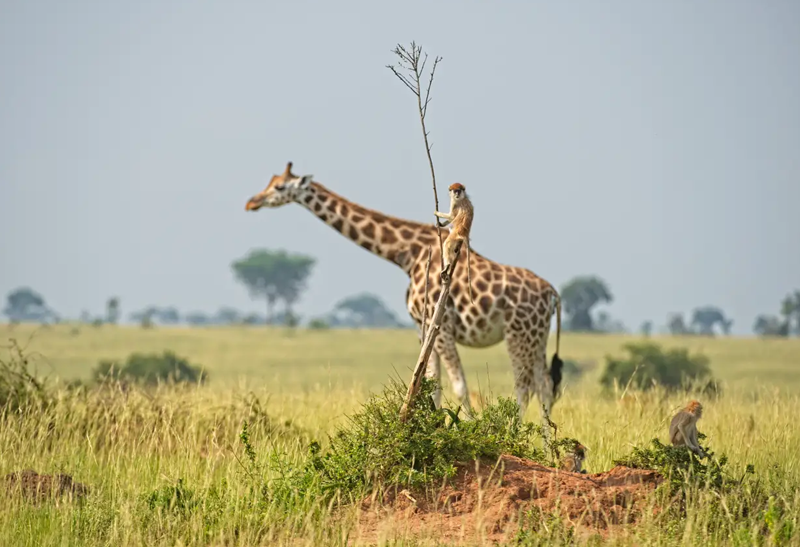 Smoked deer for dinner
In this photo by Siddhant Agrawal, we see a tiger that appears to be preparing to cook dinner.

Agrawal wrote: “I have been following the family of a tigress named Paaro in India’s Jim Corbett National Park for many years. “This is her daughter, who stood on her hind legs so she could scratch her face with a log. But it looks like she’s carrying a log on her shoulder. ” 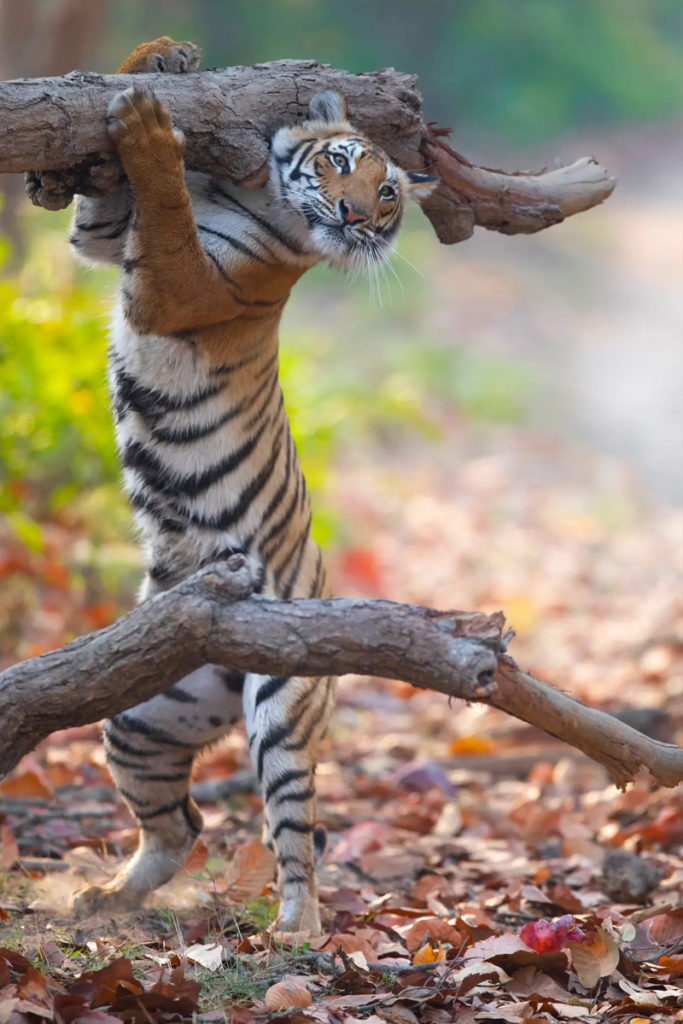 I got you
In an image of kangaroos, Roland Kranitz captured a great shot in Hungary. It looked like one gopher had been flung into the air to the ready arms of another.

Kranitz wrote: “I have spent my days in my familiar ‘gopher place’ and yet again, these funny little animals have yet to believe in their true nature. 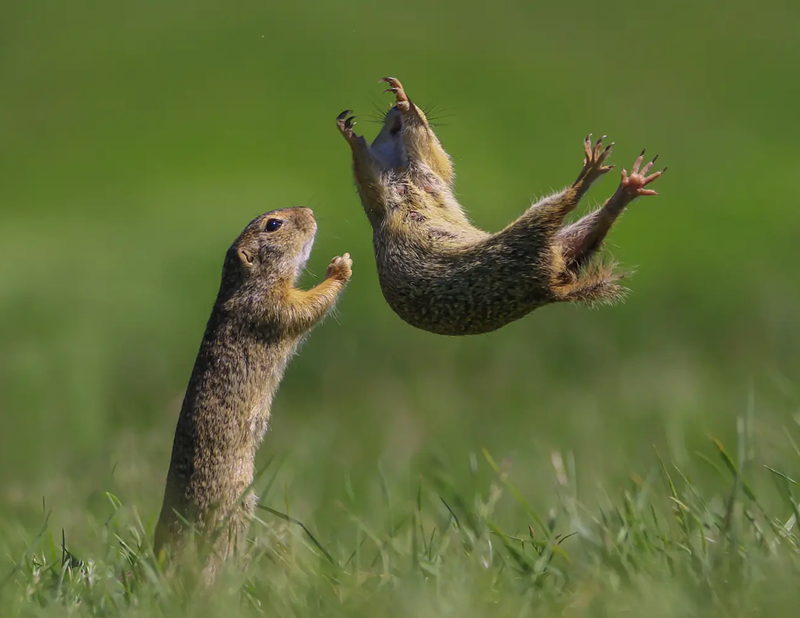 Mr Giggles
Martina Novotna captured a hilarious photo of a gray seal pup. It really was like having a good laugh. Novotna explained to Insider how she did it.

Novotna wrote: “I love captured expressions. “It looks very human. I lay on a rocky beach for hours, as motionless as I could, patiently waiting for the seal life to unfold around me.

This seal came ashore to rest a bit and ended up sleeping on its chosen rock for hours before high tide forced it to move more inland. Occasionally, it would stretch and yawn, and that is one of the yawns that leads to this expression, looking as if the seal was giggling.” 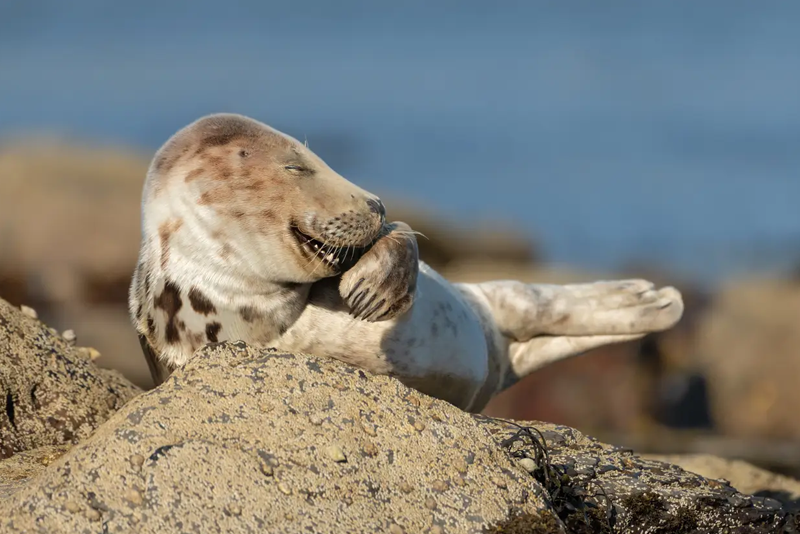 One of Pau’s favorites is a picture of a pied starling from South Africa. (see below)

Paul said: “I love this because it reminds me of what I think Tom looks like every morning.

The real-life Angry Bird is by Andrew Mayes, and most people can relate to that look, especially on Mondays.

Mayes told Insider: “I took this photo while photographing a flock of starlings perched in a tree at the Rietvlei Nature Reserve in South Africa. “It fits my mood perfectly on most Monday mornings.” Shaking off 2020
Speaking of a grumpy mood, this well-timed shot of Dawn Wilson could be a hit. After being around in 2020, it seems to really capture the overall feeling. Today, the whole world can relate to this brown pelican.

“I was photographing brown pelicans on a rainy day in southern Louisiana in early 2021, still in the midst of the Covid-19 pandemic,” Wilson wrote. “When the pelicans wake up, they shake off the water before catching the fish.

This particular person is almost shrugging as if to say, “I don’t know what 2021 will look like.” 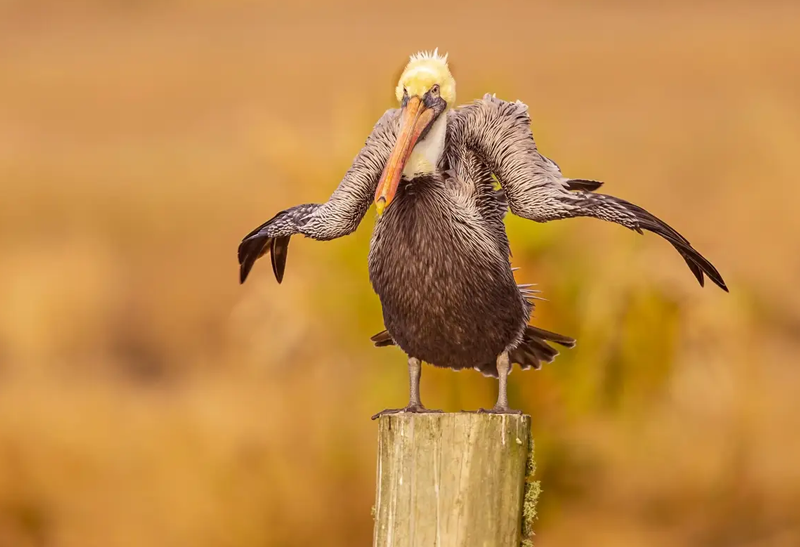 Ouch!
Speaking of cringeworthy, in this image by Ke Jensen, you might feel like LOL, cringe, or a combination of both.

“A golden silk monkey in Yunnan, China,” Jensen writes. “This is really a display of aggression. However, in the position where the monkey is in, it looks quite painful!” Missed
For Tom, his favorite is the image of Western Gray kangaroos titled “Missed”. When a kangaroo tried to do a kick to his opponent, it missed quite spectacularly.

Tom said: “This is exactly how I imagine Paul would fight if she threw any kind of punch where it would miss and look like one of these two.”

This photo is from Lea Scadden, who submitted more than one funny image of kangaroos for the Comedy Wildlife Photography Awards. Scaddan wrote: “Two western grey kangaroos were fighting, and one kicked it in the stomach.

Later, Paul and Tom discussed Philipp Stahr’s image of a boxfish, taken near the Caribbean island of Curaçao. It’s titled, “Sweet lips for a kiss!”

“We wanted to give everyone a boxfish-style kiss,” says Tom.

Underwater photographer Stahr described how he got this unexpected close-up of those juicy lips.

“Usually, boxfish are difficult to photograph. They have no problem with divers getting close, but if you show interest, they always have their backs turned away from you,” Stahr wrote.

“When the time was right, I turned the camera 90 degrees forward to aim and shoot, hoping to get the fish in focus. I never expected to have its beautiful lips closed! ” “I am proud to have stuck with the awards since it was first launched, and it has been a real privilege to see how the awards have grown and now have an incredible global coverage that winners get every year,” he said.

For Burrard-Lucas, it was fun to see thousands of entries and how they made millions smile.

“These awards really have the power to bring a smile on faces. And, certainly, for me, it’s a pleasure to see all the amazing, funny, spirited visuals you guys get into every year,” he said.

Vote for your favorite finalists on the Comedy Wildlife Photography Awards website now!