Lek Chailert is the founder of the Save the Elephant Foundation and she has been the caretaker of a sweet Asian elephant named Faamai for years. In fact, Lek went viral back after a sweet video of her singing a lullaby to the giant creature warmed hearts around the world.

The Elephant Nature Park has 5 locations, but Faamai lives at the outpost in Chiang Mai, Thailand.

The parks serve as a sanctuary for elephants rescued from tourist attractions or with nowhere else to go.

According to Coconuts Bangkok:

“Lek is an elephant expert and has been featured in documentaries produced by National Geographic, Discovery, Animal Planet, and the BBC. In 2010, she was invited to Washington DC to be honored as one of six ‘Women Heroes of Global Conservation.’ She was named one of Time Magazine’s ‘Heroes of Asia’ for her work in conservation in 2005 and the Ford Foundation’s ‘Hero of the Planet’ in 2001.”

Instead of offering tourists a chance to ride captive elephants, Lek has been successful in offering a much more humane attraction.
Those who want to spend time with these amazing creatures can walk through the preserves to observe the elephants that are roaming free.

“Both local and foreign visitors will be able to learn about and enjoy seeing happy and relaxed elephants at our project. It’s a win-win for everyone,” she said.

And it’s clear Lek’s elephants have some sense of what she’s done for them.

In yet another viral video, Lek rides her bike through the preserve. And once she’s spotted by Faamai and friends, they tag along. 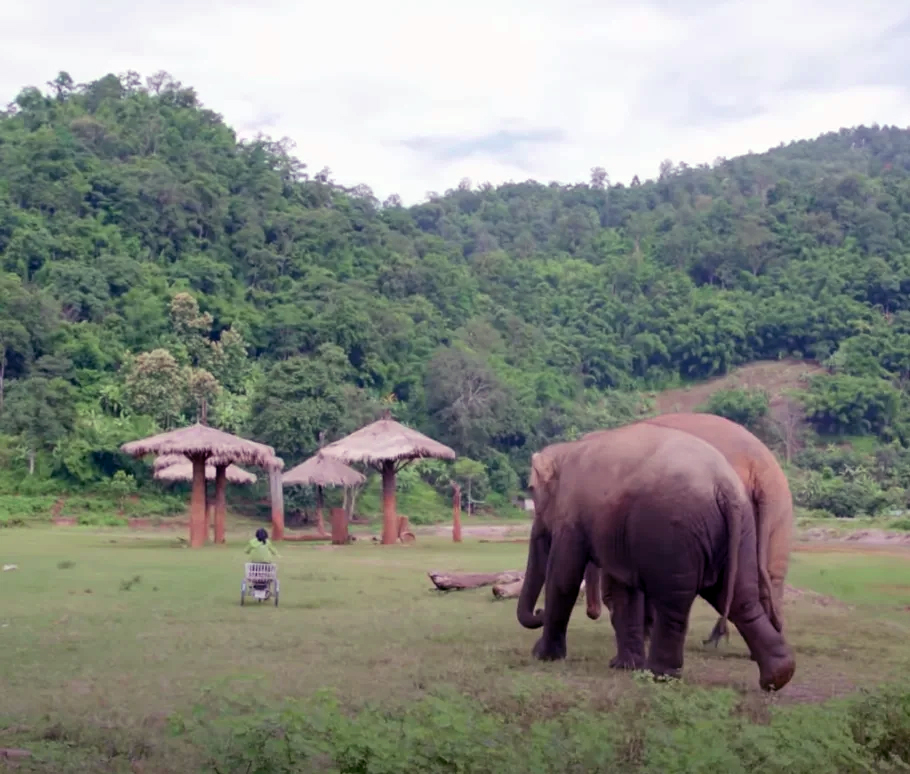 The giant creatures love playing with their caretaker, so the minute she gets off the bike, she has lots of company!

But it’s Faamai that gets the most affectionate with her – in fact, the elephant has known her since birth. 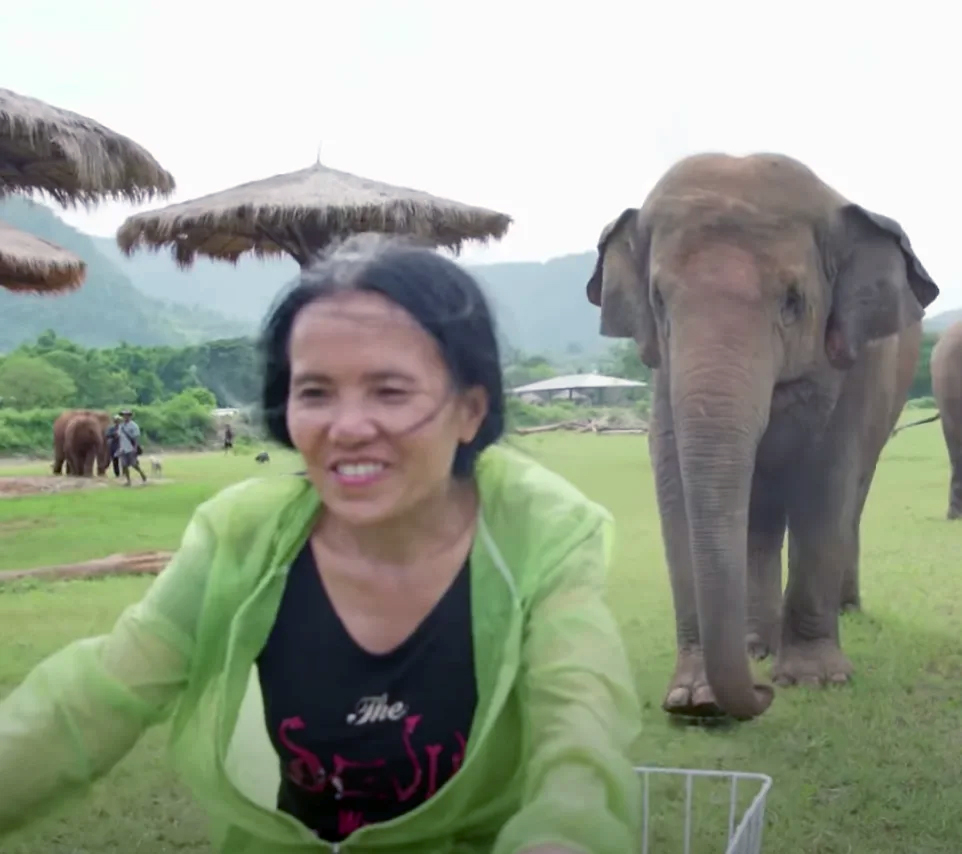 Faamai curls her trunk around Lek plays in the grass by her side and wants to follow her everywhere.

“This is the most beautiful scene I have ever witnessed a relationship between human and animal!” said one commenter.

And it truly is incredible to see Lek be able to sit on the ground and have the elephants carefully walk around her, always making sure never to step in the wrong place.

In fact, Lek’s real name is Sangduen, but she’s been called by the nickname “Lek” – which means “tiny” – her whole life because she’s so small. 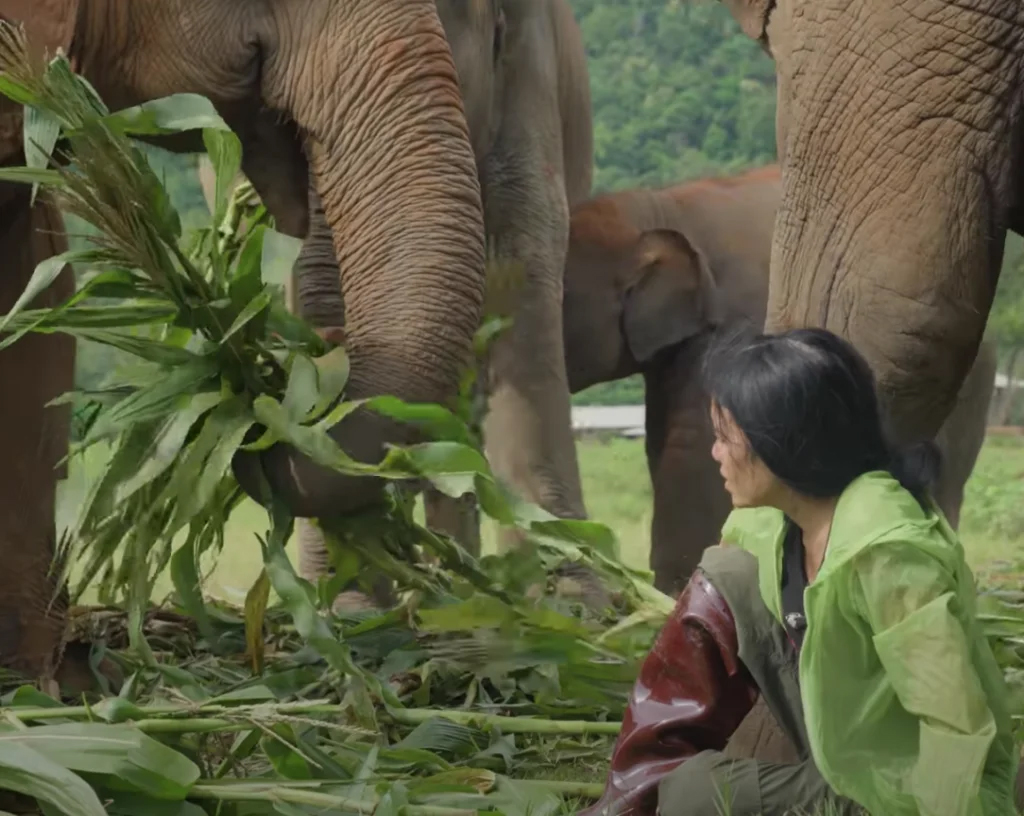 But she has a huge heart – and because of everything she’s done, millions of people around the world follow her online. The video of her bike ride alone has over 4 million views just on YouTube.

There’s no doubt that the rest of us would love the opportunity to interact with elephants the way Lek does, but she has that privilege because she’s dedicated her whole life to keeping them safe and giving them a happy place to live out their days.

Be sure to scroll down below to see what’s it’s like to take a ride through the Elephant Nature Park.