Few creatures are walking the Earth today, more majestic and intriguing than the Elephant. Their power and beauty are unmatched among the largest animals on the planet.

Human’s love affair with these impressive and gentle souls has been going on for decades. Now, elephants worldwide are being threatened with the genuine possibility of extinction.

We typically find these gentle giants scattered among sub-Saharan Africa and South and Southeast Asia. Elephants can grow to be around eleven feet tall, and they can weigh between 11,000 and 13,000lbs.

In fact, the largest ever Elephant was over thirteen feet and weighed in at a whopping 24000lbs. It’s no wonder that elephants are that big when you consider that they can quickly eat up to four hundred pounds and drink up to 25-30 gallons of water every single day! That’s an easier pill to swallow for baby elephants because, like all mammals, they feed off of their mother’s milk during the early stages of their development.

Immense creatures, elephants are typically separated into three categories or types of elephants. There’s the African Bush Elephant, the African Forest Elephant, and the Asian Elephant. Many elephants share many overlapping traits, including a long proboscis typically referred to as a trunk, tusks of varying sizes, large ear flaps for creating wind and cooling down, legs like roman pillars, and armor-like skin that is as sensitive as it is durable.

That’s not to say there aren’t marked differences. Each species has distinct traits, features, and personalities. They are the only surviving family of the order Proboscidea, which includes the famous mastodons and mammoths, and straight-tusked elephants.

Types of Elephants (Elephantidae) – There is some marked difference between Asian and African elephants. For example, African elephants have much larger ears, and their backs are more concave than their Asian counterparts. 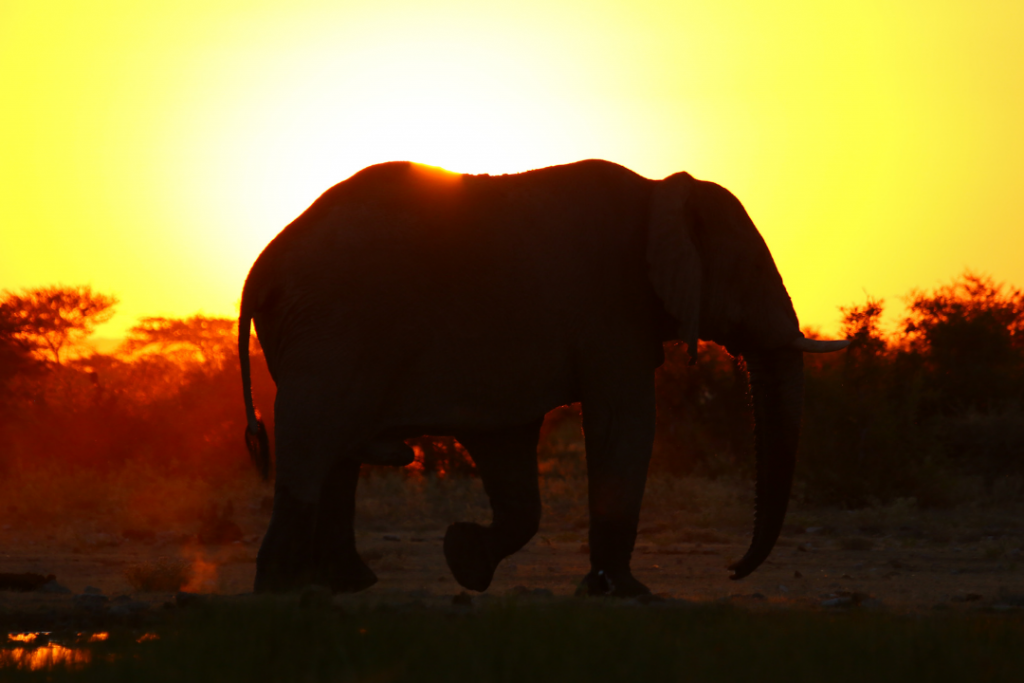 African Bush Elephants: Larger ears, a more concave back, African bush elephants are the largest land animals in the world — they can weigh up to 14,000 pounds. 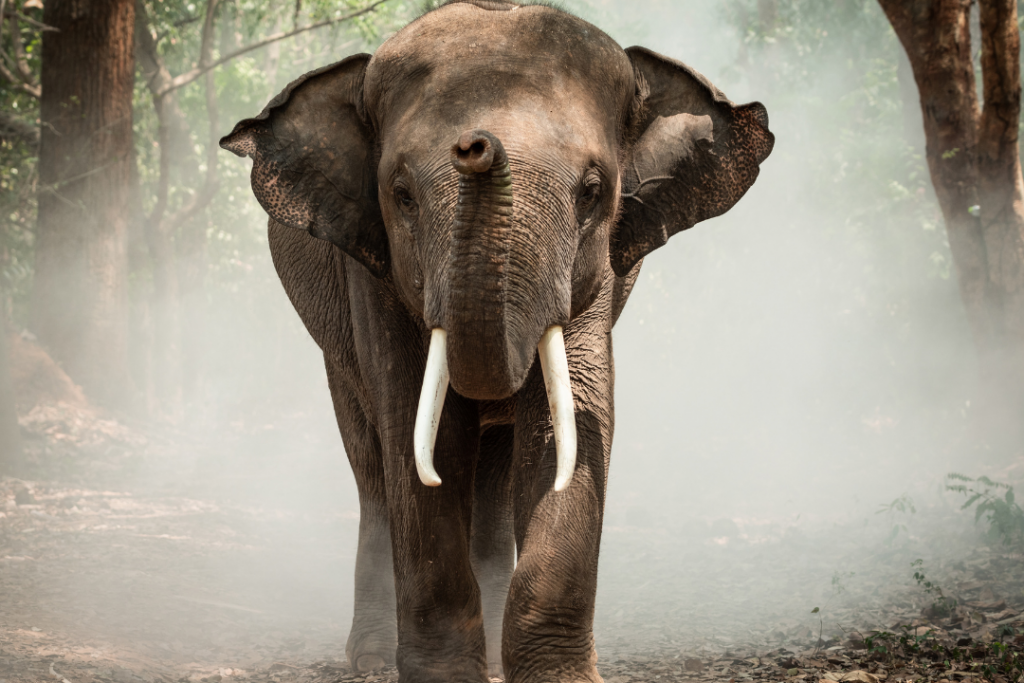 Essential Elephant Anatomy: we can break the Elephant down into five basic parts: the trunk, tusks, ears, legs, and torso/skin. Each piece is working in perfect unison with each other, allowing these colossal beasts the move about both gracefully and ferociously at the same time.

Perhaps one of the most exciting traits of all elephants is their trunk. With 150,000 muscle units, it is the most recognizable part of the animal. This appendage is a multi-use tool. 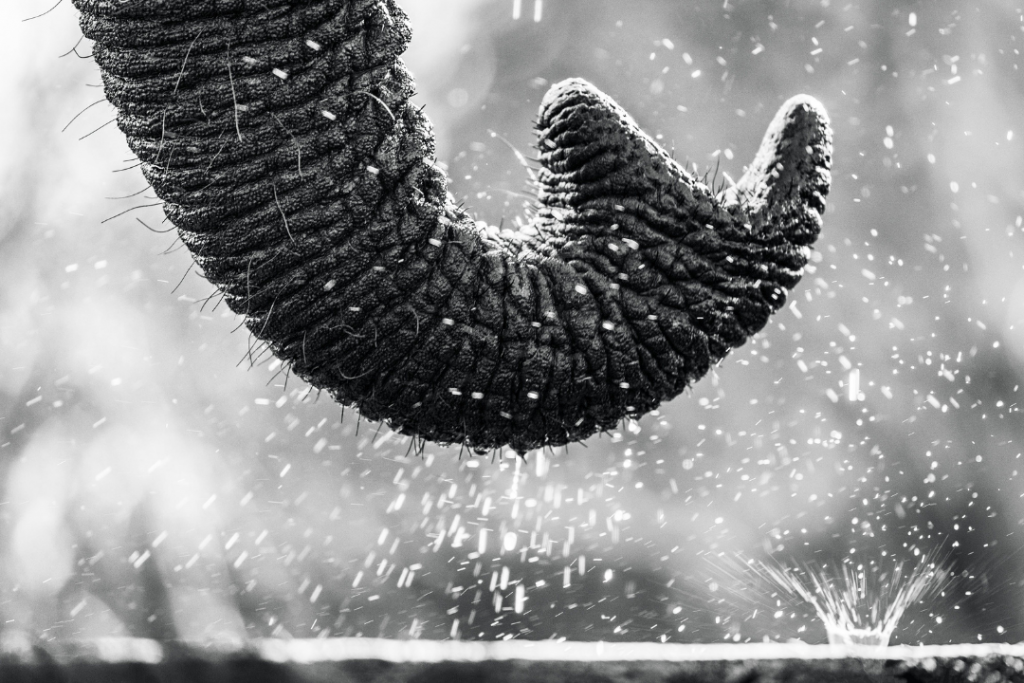 It can be used for breathing, shoveling food into their mouths while eating, taking long tasty drinks, and most amazingly, the trunk can also act like a make-shift appendage used for grasping, tossing, and lifting objects.

It’s important to note that elephants do not drink out of their trunks. They will fill the trunk up with water and then spray that water into their mouths in order to stay hydrated. The trunk can also make a wide variety of sounds from a raging roar that tells would-be predators to keep their distances, squeaking and trumpeting when they are happy or enjoying the company of other elephants.

While tusk size can vary, all tusks are part of the incisor teeth set and can serve as both tools for digging and weapons when threatened. African elephants are routinely poached and hunted for their tusks, fetching a pretty penny on the black markets. Ivory traders and poachers are responsible for the dwindling number of elephants in the world today. 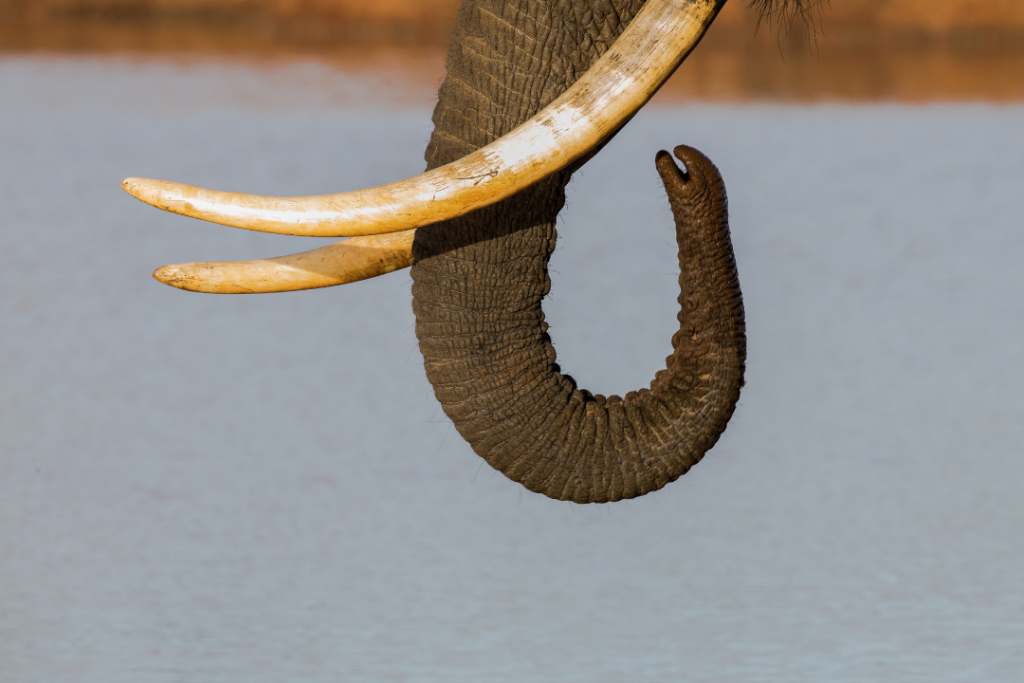 Maybe one of the most exciting aspects of elephant anatomy, second only to the trunk, is the ear flaps. These large thin flaps help maintain a constant body temperature by exposing a large surface area of blood vessels filled ears to circulating air. They are also a pivotal component to mating and communication among the troop when predators or, worse, humans, in the area.

Elephants have to have a pretty good foundation to carry all that weight, and those Roman pillar-like legs are awe-inspiring. Remarkably, their legs are so powerful that newborn calves can stand within twenty minutes of birth.

An elephant’s skin can seem impenetrable, and it is, in fact, over a full inch thick on the back of the beast and parts of the Elephant’s head. Elephants typically have grey skin.

However, African elephants may, at times, look more brownish or red. It usually happens after the Elephant is found wallowing in dirt and different colored muds. While the majestic grey elephants are what comes to mind, calves can have brownish or reddish hair on the head and back.

Elephant’s skin is super durable but also incredibly sensitive. Elephants will wallow in the mud and even throw dirt and sand on their backs to prevent sunburn during particularly harsh migrations that provide little to no shade.

You can typically find elephants in many geographical areas such as savannahs, marshes, and even sub-Saharan Africa deserts. Asian elephants can be found in South and Southeast Asia. Because elephants are herbivorous, they typically want to stay close to accessible water, especially while moving with younger, more vulnerable elephants.

Elephants are social animals who love to play and swim in the water. They love bananas and have been observed peeling bananas with their trunk before eating them. Also, despite popular belief are not a fan of the peanut.

Elephants also have a unique social dynamic in that they are typically found in herds of multiple family groups that travel and socialize together. Female elephants, known as cows, can be found in pods that include calves, other female relatives and their young offspring, and a Matriarch, typically the oldest cow among the family groups.

The matriarch elephant receives a tremendous amount of help from other “Auntie” elephants when raising babies. It’s widespread for calves to be raised by a mother and several aunties.

Males elephants often referred to as bulls, will only stay with their family group until they have reached puberty, where they must venture out and live either alone or with other males. For the most part, the female pods will only interact with males during mating season.

Calves are at the very core of the family groups when it comes to elephants. They rely on the females in the group to provide for them and protect them for up to three years. Elephants can communicate very much in the same way a human can, through touch, smell, sight, and sound. However, elephants also can use infrasound and seismic communication to express themselves over long distances.

The intelligence of elephants has been studied in depth for years and is often compared to that of primates. Elephants seem to possess a certain amount of self-awareness and have been known to show empathy for loss and mourn their dead seemingly.

Elephants are currently a protected species globally, with less than 415,000 elephants living in the wild as of 2020. It is estimated that somewhere around 90% of all African elephants have been wiped off the face of the map in just this last century – primarily due to the black market ivory trade.

Asian elephants only fare slightly better, with a fifty percent decline in their numbers over the last three generations. There are an estimated 45000 Asian/Indian elephants left in the wild.

This time it is primarily caused by habitat disruptions and the elimination of traditional migration routes to reach breeding and feeding grounds and find clean water. It causes Asian elephants to venture closer to people, and this dramatic clash of cultures often leads the animals down a path of no return.

With the dwindling number of wild elephants, it’s good to know that there are wildlife warriors out there willing to put themselves in uncomfortable positions and help track these noble beasts. Outfits will regularly survey elephants and fit them with GPS collars to better track their movements. It serves as scientific exploration, but it also helps to keep people safe by following movement patterns.

Would-be buyers are deterred illegal wildlife trade and support by helping build stronger supporting community programs like Scouts and Rangers. And implementing the use of sniffer dogs, and reeducating on the current goings-on when it comes to the wildlife trade networks, poachers, and underground sellers.

The first steps in raising awareness for any endangered animals are educating the public about the animals in question, educating local law enforcement and civic groups on poachers’ activities, and helping spread awareness for the genuine threat these animals are.

Without intervention and education, there could be a very real-time in the immediate future were the only elephants available to see are in captivity.

That would be a sad day for all of us animal lovers around the world. Keep in mind. The average Elephant only lives about seventy years. That’s about the same as an average human. There could be no more wild elephants in Africa, India, or Asia in just a few short generations.