This bear is travelling in style, being driven around a Russian city by its human companion.

Toptyzhka, a Himalayan bear, rides shotgun as Veronika Dichka, 24, who drives it around the Siberian city of Novosibirsk and out on trips to forests and fields, where the bear can climb trees and roam freely.

Dichka says she never uses a cage when travelling with Toptyzhka, who sits in the passenger seat as she drives.

‘While travelling in the car, Totyzhka behaves quite calmly, although he sometimes likes to play with the seat belt by pulling it off,’ she said. 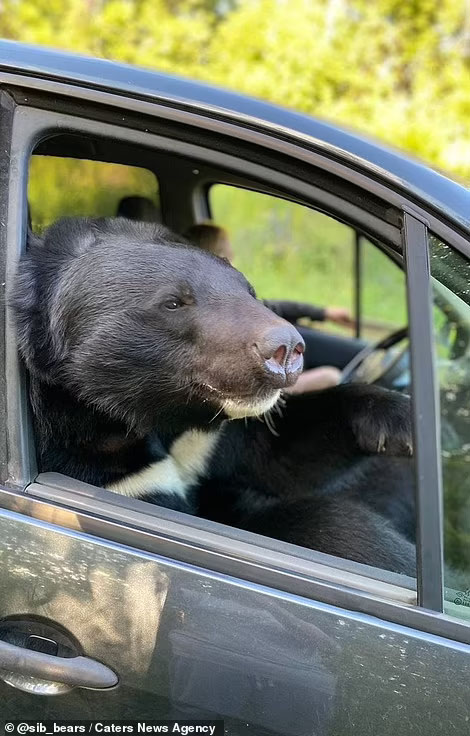 ‘He’s a curious bear, and the main thing he cares about is the steering wheel. He’s also having a great time turning the lights on and off with his nose,’ said Dichka, adding that Toptyzkha’ has always had a positive attitude towards car trips because of his curious nature.’

Bear’s owner, Maya Kirsanova, said she needed help, and Dichka said she had spent nearly every day with the giant beast since then.

Dichka herself owns a bear, which she rescued from a safari park in 2019.

‘I’m often asked if I’m afraid of bears, but I would say, on the contrary, I feel safe with Toptyzhka,’ she said.